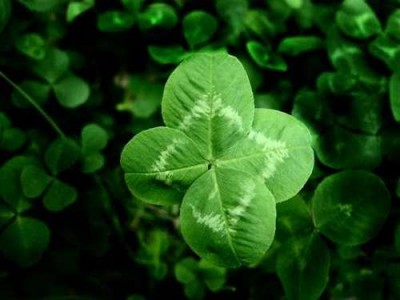 Hunting for Luck
By angelamontana

an example of a four-leaf clover

If you are heading out into mountains of Montana in search of a four-leaf clover for St. Patty’s Day, you may want to consider that your odds of finding on are about one in 10,000.  So, although tradition says that four-leaf clovers bring good luck to their finders, especially when they are discovered accidentally, you should not necessarily expect to find one.

Each leaf of a lucky four-leaf clover is believed to represent faith, hope, love and luck.

an example of a five leaf clover

If you are interested in finding your own four-leaf clover, a good place to start your search could be in a patch of white clover or red clover to find “genuine” mutant clovers.  You can also watch the video below to get motivated to head to California’s Mt. Madonna to get a giant four-leaf clover.  But, be aware that there are other plants mistaken for four-leaf clovers, such as Oxalis tetraphylla, which is a species of wood sorrel with leaves resembling a four-leaf clover and Marsilea quadrifolia.

(Above nformation and photos via wikipedia.com)