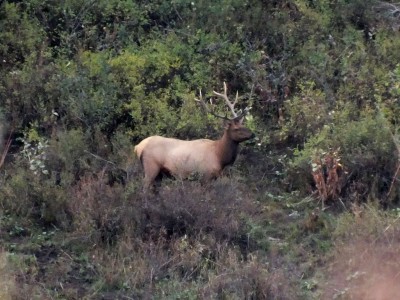 A Minnesota man has been ordered to pay $2,070 in fines and restitution for allowing his teenage son to illegally kill a 5×5 bull elk in the Larb Hills area of the Missouri River Breaks during the 2013 archery hunting season.

Troy A. Carlson, 48, lives in the St. Paul suburb of Inver Grove Heights, but his family owns property in the Larb Hills. The elder Carlson was cited by Montana Fish, Wildlife & Parks Warden Ben Morin for possession of the illegal elk and hunting without a license by accountability for allowing his son to shoot and kill the animal without a permit. The minor son was not charged.

Carlson entered into a deferred-prosecution plea agreement in Phillips County Justice Court in Malta, where he forfeited the fines and restitution. Morin said Carlson also agreed to not apply for any archery elk permits in Blaine, Phillips and Valley counties for one year, which covers the 2014 hunting season.

Morin was responding to a trespassing call from the family’s Blue Ridge Ranch last Sept. 24, when he stopped along a public road to talk with Troy Carlson and his son, who had the dead elk in the back of their truck.

Further investigation and a search warrant that was authorized on the family’s ranch revealed that Carlson’s son did not have the proper permit to kill the animal. Morin said the elk, archery equipment, and other evidence was seized as part of the case.

In 2010, Troy A. Carlson and several other members of his family agreed to pay a total of $50,000 in restitution and fines to the state of Montana for illegal baiting of elk, hunting without licenses and/or permits, illegal outfitting, and other wildlife-related crimes on the same Phillips County property.