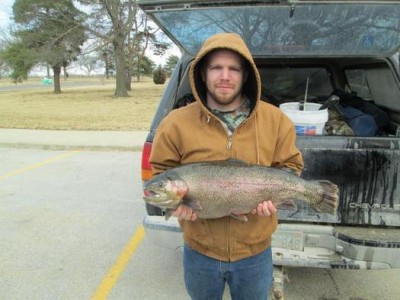 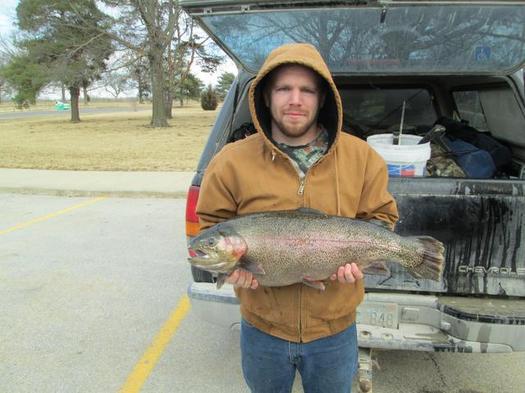 On February 23rd, at Kill Creek Park, just south of Desoto, Kansas, Josh McCullough decided to throw a line in using Berkley Gulp bait.  To his surprise, a 15.72-pound rainbow trout decided it was craving this particular snack that day!  McCullough’s catch is currently a pending Kansas state record.

According to kansascity.com, McCullough said, “There were rumors going around that they had stocked a few trout up to 12 pounds this year,” McCullough said. “But I didn’t expect anything like this.”  He also said the he has never seen a trout that big.  Talk about an awesome catch!

Montana’s current state record rainbow trout was caught in the Kootenai River near the David Thompson Bridge by Jack Housel, Jr. back in August of 1997.  The sky isn’t the only thing big in Montana, as this rainbow weighed in at a whopping 33.1 pounds with a length of 38.62 inches (click HERE for a complete list of Montana state record catches).  In comparison, the current, before McCullough’s pending record catch, Kansas state rainbow trout record is a 15.43-pound, 33-incher that was caught in 2012 at Lake Shawnee by Nicole Wilson of Topeka.

(Photo and story via kansascity.com)