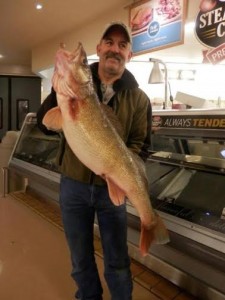 Paul Rossignol forwarded us this photo of a new record walleye that John Grubenhoff caught in the Columbia River last Friday, February 28, 2014.  The walleye exceeds the state’s previous record by 1.02 pounds!

A post by Jeff Holmes on nwsportsmanmag.com revealed the following detailed information on the catch: 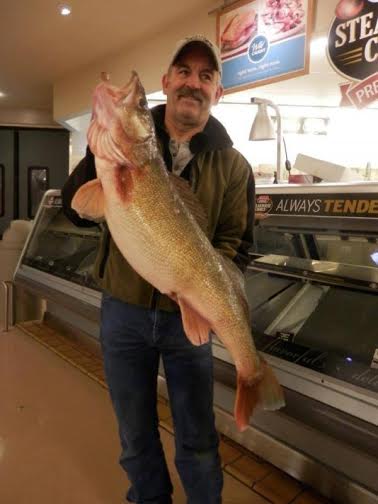 The fish came from “22 feet of 37-degree water on a rocky, windswept shoreline,” said Grubenhoff, who is a well-known tournament angler. He took advantage of lengthening daylight to fish an undisclosed hole by himself after getting off work in Finley, quickly landing a 5- and then a 14-pounder prior to getting bit by the record fish.

The prespawn female struck hard, and early in the fight Grubenhoff knew he had hooked a monstrous walleye, so he cut the motor to avoid losing it against the current.

The fish bit a J-13 Rapala in silver and black, trolled upstream at .8 to .9 mph behind a 2-ounce bottomwalker. Grubenhoff had actually switched to this tactic immediately after catching that 14-pounder!

After a lengthy fight, Grubenhoff was then barely able to corral the fish in his medium-sized net. When it hit the floor of his boat, he knew it would potentially challenge the record. Since he had no scale or measuring device on board, he knew he had to call his son — fast.

The fish pegged the scale his son brought to the dock at 20 pounds, so Grubenhoff quickly contacted Washington Department of Fish and Wildlife officials to meet him at an approved scale in Richland. WDFW certified the record fish at 20.32 pounds, just hours after it was caught.

Paul Rossignol, who also knows Grubenhoff, stated, “I knew it would just be a matter of time until the 20lb barrier would be broke in the Columbia.” Boy, oh boy was he right!  Nice catch, John!

(Information and photo via Paul Rossignol and nwsportsmanmag.com)