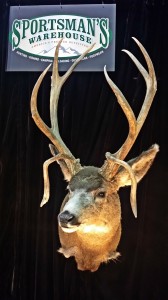 Have you ever wondered what the buck with world record brow tines looks like?  Well, I found out at the Great Rockies Sport Show in Missoula this past weekend, and, if you missed it at the Eastman’s Trophy Deer Tour booth, (after stopping by to say hello to the Captain at the Montana Outdoor Radio Show booth, of course), you can see it here.

This incredible 172-0/8 buck was shot in 1968 by Dema Randall in Utah.  The funny part about this particular story is that she was supposed to go hunting with her Dad and her brother one morning, but she was putting on makeup (which kind of threw me off, but to each their own) when they were ready to go, so they left her.

She eventually made it out later and was walking a ridge with her .243.  She saw a buck, but she realized her rifle wasn’t loaded (which also threw me off, but okay), so she got it loaded and fired a quick shot, dropping the buck with a bullet to the neck.

She made it to the buck and immediately began field dressing the buck, and didn’t think anything of his antlers except she noticed how tall they were.  When her brother and Dad met up with her, they couldn’t believe the monster brow tines they were looking at on Dema’s buck!   And the rest is history.

Check out the picture of this monster and his measurements below.  I can’t believe she didn’t even notice the brow tines on him! 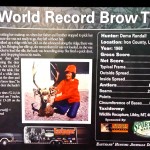 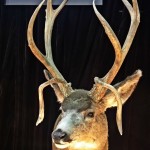