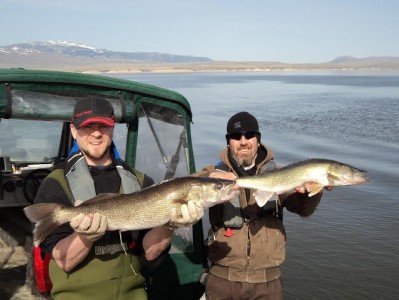 Warm water temperatures have the annual spawing survey on Canyon Ferry Reservoir in full swing.  Over 450 walleye have been captured, tagged and released to date, already nearly 100 more than in 2013, and some large females have started to show up.  The largest walleye captured to date has been a 29.9-inch ripe female, but five additional 20-inch plus females were also sampled during the same timeframe.   The weather forecast continues to be promising, at least short term, so look for walleye numbers to increase throughout the week of April 21st.

One more northern pike was sampled late last week, bringing the spring total up to three.  Over 1,000 rainbow trout have been released from traps, as well as hundreds of other fish, during the annual spring survey.  Come out and see for yourself if you’re interested! 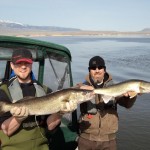 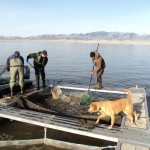 Volunteers assist FWP personnel with removing fish from large traps that are used to monitor spawning fish on the south end of Canyon Ferry Reservoir.