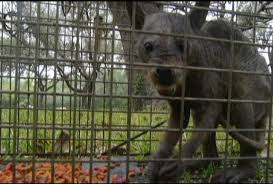 The mythical livestock killing machine has been officially found alive in Texas. For the last few years, people all over the southwest have been finding evidence of an unknown animal species, but no one has yet to capture one alive. Recently a critter was captured in Texas that resembles the description of the mythical Chupacabra. It doesn’t seem as ittimidating as the myth suggests. The myth describes a creature with red eyes and a mouth full of teeth, and the name translates to “goat sucker.” To us it looks more like a mangy raccoon, but it could be a different species all together. See for yourself.