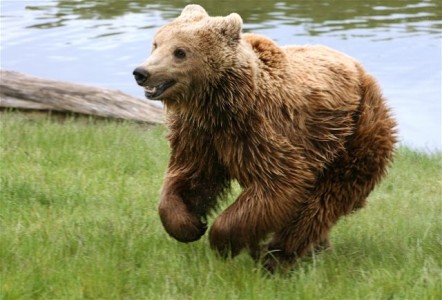 According to FWP Bear and Lion Specialist Erik Wenum, a 6 year old 340-pound male grizzly bear was captured on April 6 south of Eureka.  FWP was assisted by USDA Wildlife Services personnel in capturing the grizzly.

The grizzly was implicated in a calf depredation that occurred on April 2.  The bear had been previously captured in British Columbia during research trapping efforts in the fall of 2011. At that time the bear was fitted with ear-tags and released.

On April 7, the bear was examined and radio-collared.  The grizzly was released on April 8 in Glacier National Park, assisted by GNP personnel, in an area seasonally closed due to snow and road conditions.  There are no known previous management situations involving this bear.

Additional bear activity reported by Wenum includes four black bears that were captured over the last three days in the Columbia Falls and Whitefish areas. This level of activity indicates that while many bears may still be denned or close to their dens some have dropped to lower elevations in search of foods. As temperatures rise and snow melt begins more bears are emerging and dropping to the valley floor. Residents are encouraged to secure any attractants that may have been out during the winter, especially trash, birdfeeders, pet and livestock feeds.