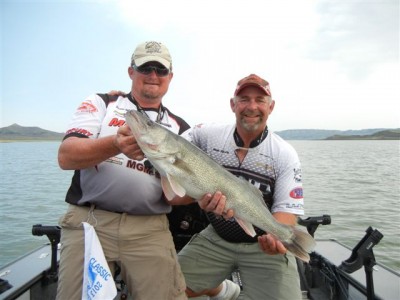 Jordan Chapter of Walleyes Unlimited hosted it 19th Annual Tough Guy Walleye Tournament on Saturday April 19.  There were concerns about the ice not being off Fort Peck earlier in the week, but a majority of the lake was open by tournament day.  The tough part turned out to be not so tough as temperature warmed to 70 degrees by days end. This provided a much hoped for opener to the Fort Peck walleye season.

Forty-six teams braved the early season fishing to be greeted by a surprisingly good bite considering water temps between 38 and 40 degrees.  Approximately 30 of the teams weighed at least one fish, which is outstanding for a tournament known to have a difficult bite.The vast majority of the fish were males which were ripe indicating that the spawn is in full swing. No large walleye were caught but  the biggest of the event was 5.60, which – gave Circle’s Todd and Trever Klepplid a boost to their  winning weight of 14.30 pounds.  Second place for big walleye was caught by the Miles City teams of Taylor Kennedy and Tyler Trogden of Miles City with a 4.70 pounder.The remainder of the top 7 places which were pair were;  2nd: Clyde and Brem Phipps, Jordan, 11.30 #;  3rd: Jerry Johnston of Jordan & Jerry Evenson of Billing, 10.30 #; 4th-5th tie: Hal Haines Miles City-Robert Johnson-Jordan;  Pat Slater-Marc Nuss, Powell Wyoming  both teams with 8.13#; 6th: Joe DeJong of Stanford-Curt Wiley of Miles City, 8.09#; 7th Cody Strohm of Richey and Keeley Montgomery of Miles City with 7.12#.Northern fishing was outstanding with 12 northerns  over 10 pounds with the largest weighing in at 14.60# by the team of Chad Formanek and Brian Brumeyer.Given this early bite it could only be expected that another outstanding year is in store for Fort Peck lake.