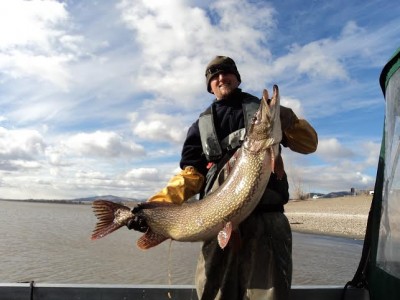 Optimal surface water temperatures over the past week brought in a number of large female walleye during the 2014 spring spawning survey on Canyon Ferry Reservoir.  Eight ripe or spawned out females, larger than 28-inches, have graced our trap nets since the last update and the number of walleye captured, tagged and released increased to more than 600 total .  The largest walleye captured to date was a 31.7-inch, 15.0-pound ripe female and numerous other spawning aged females, greater than 20-inches, were also captured. However, due to lack of males and the number of spawned out females being captured, FWP crews will likely conclude the 2014 spawning survey later during the week of April 28th.

Two more northern pike were sampled since the last update, bringing the spring total up to five.  The largest of the most recent pike captured was a 46.5-inch, 30.04-pound giant.  Over 1,600 rainbow trout have now been released from traps, as well as hundreds of other fish. 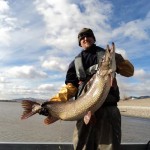 FWP personnel with a 46.5-inch, 30.04-pound northern pike captured during the 2014 spawning survey on the south end of Canyon Ferry Reservoir. 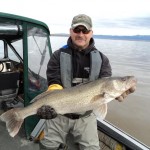