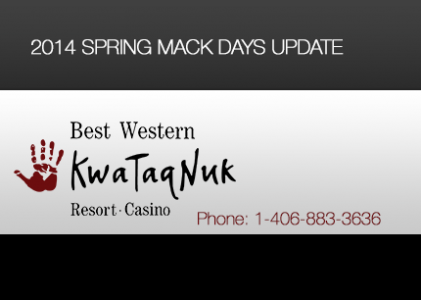 The 2014 Spring Mack Days Fishing Event is in the final week of competition. A total of 24,544 lake trout have been entered by 238 anglers. Mack Days Fishing Events are sponsored by the Confederated Salish and Kootenai Tribes. Up to $150,000 in Cash and Prizes will be awarded at the conclusion of the 34 days of fishing on Flathead Lake. The event will end on May 18th with a fish fry beginning at 3:00 and awards at 4:00 at the Blue Bay Campground. Restoring a balance to the fishery of the lake by reducing the non-native lake trout and increasing native bull trout and westslope cutthroat trout numbers is a management action agreed to in the Flathead Lake Co-Management Plan. The fishing event is used as one of the management tools by the CSKT to make a difference and reduce the numbers of the lake trout in Flathead Lake.

The third bucket of fish day was won by Terry Krogstad and Chris Steen of Kalispell with a bucket weight of 20lbs.5ozs. The team of Tyson Cottet of Charlo and Chad Cottet of Polson came in 2nd with a weight of 18lbs.7ozs. and 3rd was Dan Smith-Kalispell and Jim Hoover-Whitefish with 17lbs.15ozs.

The $10,000 tagged fish is still out there. Tagged fish with $500 tags were turned in by Larry Ashwell-Missoula and Mike Benson-Lonepine, and$100 tagged fish winners were Tim Vacca-Missoula, Jason Mahlen, Matt Guckenberg, Chris Steen, and Terry Krogstad-Kalispell, Larry Ashwell-Missoula, and Steven Benson Four Lakes, WA. Two $5,000 tagged lake trout five-$1,000 tagged lake trout, and over 5,000 with values from $100-$500 are still out there waiting for a lucky angler. Entries continue to be taken until the last day of the event and there is no entry fee. All it takes is one fish to enter the lottery drawing.