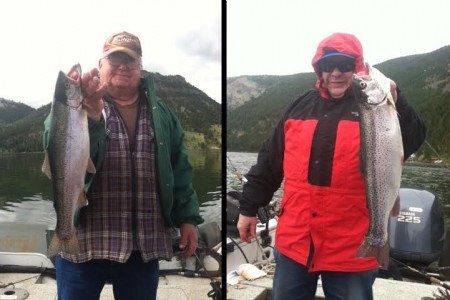 The weather was great to start out the day on Tuesday as the Captain was joined by Don Beardsley and Dick Chrest, of Missoula, fishing. That lasted until 11 am and then the wind began to blow and the temps dropped as a cold front moved in. The cooler weather didn’t effect the fishing though.

The boys from Missoula left with their limit of trout about 3pm.  It seemed like the j-7 silver/black Rapala was the most effective lure that they used that day, according to the Captain.  The biggest trout was 20 inches, but most were in the 15-inch range.

They fished from 5 to 15 feet deep with the shallower depths working the best. Most of the fish that they boated were in the split rock area of the lake. 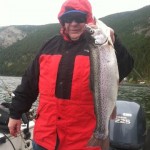 Dick Chrest with a nice rainbow 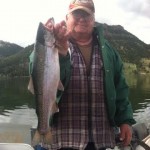 Don Beardsley with a nice rainbow