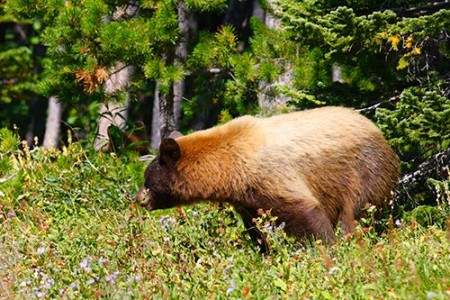 A young grizzly bear apparently fell to its death in Glacier National Park, where it was found on the Going-to-the-Sun Road by maintenance workers.

An investigation, which included a necropsy of the roughly 5-year-old bear, indicated that it most likely fell off a steep snowbank Thursday morning and landed head first on the pavement about a mile above “The Loop” section of the road. Based on crew movements up and down the Going-to-the-Sun Road, officials estimate the bear fell sometime between 9 a.m. and 10 a.m. Thursday.

According to a recent Missoulian article park spokeswoman Denise Germann said the bear was discovered on Going-to-the-Sun Road by a member of the park road crew at 10 a.m.

Germann said a necropsy indicated the death was a result of a fall. The bear had head injuries, broken ribs and other internal injuries consistent with a fall.

“There was no evidence of any struggle or fight prior to the fall, or any indication of a vehicle collision,” Germann said.

The terrain above the spot where the grizzly was found includes a steep snowbank and steep cliffs.

Grizzlies are listed as a threatened species in the lower 48 states. Park authorities notified the U.S. Fish and Wildlife Service as required by law, and also informed Montana Fish, Wildlife and Parks.