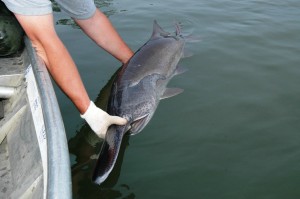 The search for the prehistoric river monster continues here in Big Sky country. Our paddlefishing guru, Glen Siroky, recently checked in with a paddlefishing update.
Catch and Release for Paddlefish continues to be hot on the Upper Missouri River (White Tag) Area and will continue throughout June 15th. River flows have dropped to 15,100 cfs, but still plenty strong for continued excitement. Bait fishing has really cooled down this week after the cold water came downstream, but picked back up today as it rewarmed. Cats and Walleye are slowly turning back on.
Season opened at Intake (Yellow tag Area) yesterday. It was a Catch and Release Only Day there and as of 11:00 yesterday morning, 40 fish had been caught and released. Pressure there is very high, and snags are abundant, so bring plenty of extra tackle. Sundays, Mondays, and Thursday are Catch and Release Only Days. Tuesdays, Wednesdays, Fridays and Saturdays are Catch and Keep Harvest Days Only. You must tag the first fish you catch on those days.
Bow fishing the Dredge Cuts at Fort Peck (Blue Tag Area) for Paddlefish runs from July 1st August 31st and interest has definitely been growing for this.  Across the border in North Dakota, as of the 13th, 622 of the 1000 fish quota had been harvested. Largest so far has been 123 lbs. The crowds have grown extremely large there as the oil boom has exploded. Expect elbow to elbow and castovers aplenty.