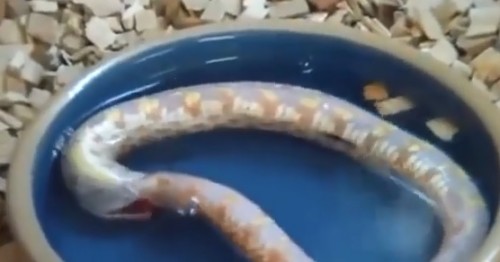 Snake Devours Itself [VIDEO]
By angelamontana

There is a reasonable explanation for a snake that eats their own selves.  A post on iflscience.com revealed some potential situations that can cause snakes to turn to self-cannibalism:

If snakes get too hot, they can become confused and disoriented. They also get a ramped-up metabolism, causing them to have a false sense of hunger and a desire to eat the first thing they see. As captive snakes typically live alone and food isn’t routinely consistently available to them, they end up attacking themselves.

Snakes may also attack themselves if they are shedding and have diminished eyesight, mistaking their tail for prey.

When a snake begins to self-cannibalize, reducing the temperature by turning off heat lamps and spritzing the snake with cool water can help alleviate the stress and the snake may let go, though sometimes intervention by a veterinarian is required. These episodes can be fatal. Because snakes have evolved to trap food and guide it in, it can be difficult for them to let go once they have started eating.

Robert Mott, the videographer, was inside a pet shop when he came upon this snake and claimed in the description on YouTube that the owner was not immediately available (though it doesn’t sound like too much effort was put into trying to help the poor thing as he opted to laugh and film instead of demanding the attention of an employee).