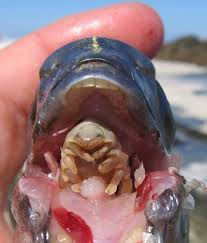 How would you like to be living your life, just doing your thing, to realize one day that your tongue was eaten off by a parasite bug that decided to stay in your mouth and act as your new tongue…forever?!  Yes, this actually happens to some fish…although, this crustacean is not found in Montana, as we have no salt water, it has been found in three types of snapper species off the coast of California and also in New Zealand.  There was also an isolated incident in the UK.  There has been a relative of this parasite attacking fish off of the Jersey shore, too.

The thought of the entire scenario is still quite disturbing, but nature isn’t always cupcakes and glitter.  So, if you are fishing off of the California cost, and you catch a fish that has an odd crustacean fall from its mouth after it’s dead, and the fish’s tongue has nothing more than a stub left, don’t be surprised if it is the Cymothoa exigua.

Here is more information on this parasite from Wikipedia.org:

Cymothoa exigua extracts blood through the claws on its front, causing the tongue to atrophy from lack of blood. The parasite then replaces the fish’s tongue by attaching its own body to the muscles of the tongue stub. The fish is able to use the parasite just like a normal tongue. It appears that the parasite does not cause any other damage to the host fish.  Once C. exigua replaces the tongue, some feed on the host’s blood and many others feed on fish mucus. This is the only known case of a parasite functionally replacing a host organ. There are many species of Cymothoa, but only C. exigua is known to consume and replace its host’s tongue.