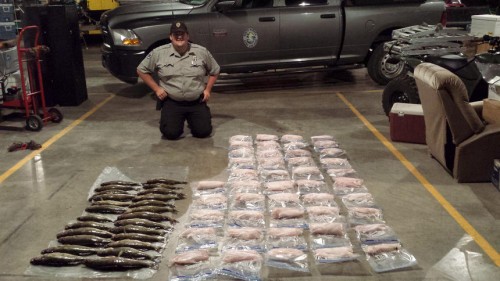 In North Dakota, the walleye limit for anglers is 5 per day, 10 in possession, and it is a class B misdemeanor if you exceed your possession limit.  According to a recent article on grandforksherald.com, a tip was given to the North Dakota Fish & Game Department (NDFGD) that a group of anglers were staying in a rental house and fishing Devil’s Lake, keeping a number of fish over the legal limit.

Jim Job, the district game warden for the NDFGD in Devil’s Lake and another district game warden stopped by the rental house unannounced and found 135 cleaned walleyes, frozen in 45 plastic bags, along with another 25 whole walleyes in their vehicles.  This put the group of anglers, which included one juvenile, at exactly 100 walleye over the legal limit.  The adult anglers could face up to $1,725 in fines each and scheduled to appear in court on August 18th.

As we all know, regulations are set for a reason, and these incidents serve as a reminder of the importance of ethical sportsmanship, especially when mentoring the youngins.  Let’s work together and keep stories like this out of the news by remaining ethical and following hunting, fishing and trapping regulations.  Setting a good example for our future generations of sportsmen should be a priority to all of us.  When we vacation in other states, just as these anglers were from Wisconsin and visiting North Dakota, make sure to learn their regulations, as fish and wildlife management laws differ from state to state.

Jim Job, district game warden for the North Dakota Game and Fish Department in Devils Lake, displays the 25 whole walleyes and 135 frozen walleyes that were confiscated from six Wisconsin anglers June 20 on Devils Lake. The five men are scheduled to appear in court Aug. 18 and were charged with being 100 walleyes over the limit. The sixth person is a juvenile. (N.D. Game and Fish Department photo)