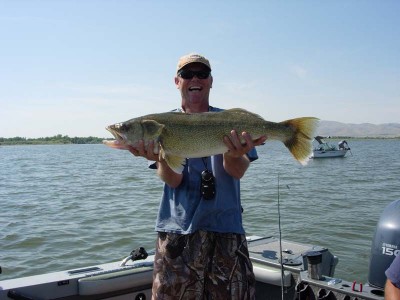 In Western Montana, most rivers are still running above their normal flows for this time of the year, but their flows are coming down. The fishing, as you might expect, is also improving daily on the rivers.  Here is a river and lake fishing report that was sent in to me by JohnPerryFlyfishing.com. “Blackfoot River fishing is good from 8am to about 2 pm.  Large dry attractors working with pats rubber lends dropped off. The upper Bitterroot River is starting to heat up in action with small golden stone patterns and medium sized May fly patterns.  Best fishing seems to be from about 9am to about 3 pm and then it slows up.  Damsels are working on Georgetown Lake- but with mixed fishing success-some bay’s are fishing a lot better than others- you will have to drive around the lake and find where the action is.  Smaller tributaries around Western Montana are fishing well with old basic standbys like royal wulff and yellow humpy.”

Canyon Ferry walleye fishing was good over the weekend. Paul Lindsoe e-mailed me this report after he caught what he believes to be a 13-14 pound walleye that he released back into the water. See Lindsoe’s story on the walleye here. “I Released 4 walleyes over 20″ last weekend, caught over 50 each day, kept a few 14-19″ to eat.” Lindsoe reported.

In other fishing news closer to home, there is still no word on the Whitefish Bite happening yet on Flathead Lake. This is the time of the year that the whitefish should begin to bite if they are going to bite at all. Let’s hope that the popular bite will take place in the next couple of weeks.