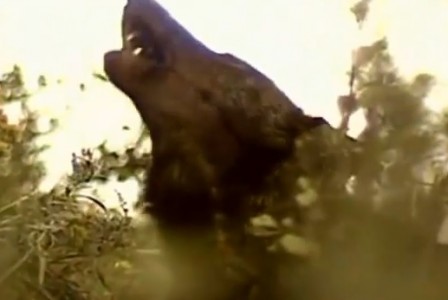 A recent news clip posted by Caitlin Conrad/KTVL.com in southern Oregon discusses the fear that the Oregon Hunters Association and others have been fearing a wolf population such as Montana’s and Idaho’s current and expanding wolf population.  They do not want to see that.

What are your thoughts on this article from KTVL.com last week:

SOUTHERN Ore – Wolves in our western wilderness are part of the American heritage. For decades the animals were absent thanks to a manmade eradication. Now they’re back, again because of human intervention.

The comeback of wolves is one which makes wildlife advocates very happy, and hunters and ranchers very unhappy.

The Oregon Hunters Association says it’s been watching what’s happened in Idaho and Montana, and a wolf population like theirs is not something it wants to see.

Lance Podolski is one of the southwest directors for the OHA. He says the wolf packs we have, have already changed what’s available to hunt in the northeast part of the state. Podolski says he used to love hunting in the Hells Canyon area, but doesn’t plan to go back, “the elk are not where they’ve been in the past, they’re not up on top, they’re not in the open much at all if at all,” he said

In other words the prey is getting smarter, and hunters like Podolski are coming home empty handed. Which isn’t just bad news for those looking to bag an elk, it’s also hard on the state. ODFW’s funding comes almost entirely from tag and fishing license sales. This week state biologists confirmed OR-7, southern Oregon’s celebrity wolf, has found a female. The new companion makes a pack in western Oregon a real possibility.

Currently the animals are state protected in the eastern part of the state, and west of highway 395, they are also federally listed endangered species. Podolski believes Oregon, like other states, will eventually see the delisting of wolves. He hopes this will be followed by the opportunity to hunt the animals as a form of population control.

Wildlife advocates here say they’re not ready to take a position on hunting wolves but will say they want to see the federal listing stick. “We need a fair and balanced plan to manage wolves, and federally endangered species listing gives us that fair and balanced plan,” said Morgan Lindsay with Klamath Siskiyou Wild.

Hunting the formerly endangered species is a controversial topic, because for many wolves are beloved. In Idaho the state far surpassed its wolf management numbers and hunting the animals was opened up. In 2013 Idaho hunters killed 356 wolves and the year before, they harvested 329. How Oregon’s hunting system could work is yet to be determined.

Poldoski says hunting is just one more tool we use to manage wildlife. He says it’s our responsibility as wildlife managers is to provide protection for all animals, predators, and prey alike. He says Oregon is already seeing a decrease in deer and elk, and argues wolves will only the problem worse.

Up at wolf headquarters in La Grande, ODFW’s Russ Morgan, says we shouldn’t get ahead of ourselves. Morgan is the wolf program coordinator and a hunter himself. He says the state is already working on a wildlife impact study. Morgan warns people against trusting guess work, “to just say because we have wolves, our elk populations will go down, or deer, or whatever, is probably not based on solid science,” he said.

Morgan says the study will also take into account the impact wolves have on other big predators like cougars and bears.