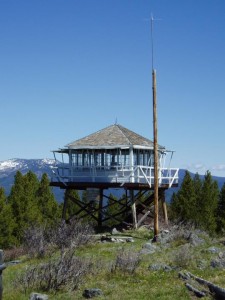 Rent a Fire Lookout for Fall
By OutdoorAly

Following the devastating fires of 1910, early fire detection became a priority within the Forest Service. To help aid detection, lookout towers began to be built on national forests throughout the country. These building efforts were further aided during the 1930s by the Civilian Conservation Corps, who worked on numerous lookout building projects across the nation.

Today many of those lookout towers have been rendered useless by advanced fire detection technology such as computerized lightning detection systems and air patrols. In severe fire seasons, some fire lookouts are still staffed, because they offer views not covered by other systems. But for the most part, they are a dying breed. Many were removed from their mountaintop locations during the 1970s and ’80s. Some were dismantled and reconstructed in historical parks as romantic reminders of the past.

But the Forest Service has preserved many of these towers that litter mountain tops around Montana, and surrounding states. These are now rented out for recreational use and can provide a romantic, secluded get away with spectacular views.

The towers book up fast, and many are open only in the summer to late fall, but there are still spots available for this season. Early fall is a fantastic time to book one of these towers as temperatures are mild and reservation spots open up as tourist season winds down.

To book a lookout tower go to www.recreation.gov.  Most towers are accessible by vehicle, but some provide a challenging 1-3 mile hike in. They do fill up fast, so book now for your fall getaway!

Featured photo is of McCart Lookout in the Bitterroot. McCart Lookout is a historic tower located on McCart Peak, east of Sula. It has been restored to reflect a lookout of the 1940s, including the stove, furniture, dishes and other small touches. It offers a unique chance for visitors to camp on a mountain peak, on the border of the Anaconda-Pintler Wilderness, in a rustic, old-time setting. The tower provides spectacular views of the surrounding western Montana wilderness.