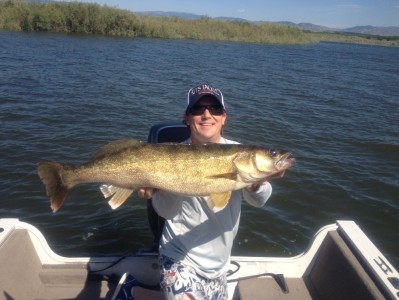 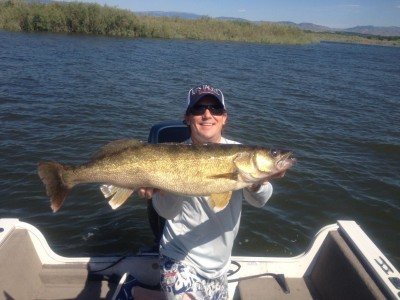 It all started with an alarm clock that rudely decided to start barking at me at 4:10 AM last Thursday morning. Normally I would give it the Chuck Norris karate chop and roll back over into the warm embraces of my dogs and my wife, but not this morning. I was headed to Canyon Ferry with my awesome pal, Jeff Ingram for a much needed and deserved day of pitching jigs in hopes of persuading giant walleye to bite. As I pulled up at Jeff’s house at 4:35 AM I was surprised to not see any lights on or the boat waiting. After giving him a text I decided to rock out to Outlaw Country on XM radio in my truck. Within a few minutes, the lights turned on and Jeff was like a finely tuned assembly machine going from opening his eyes to ready to fish. Giving him a quick nudge I joked, “Sleeping in on me eh?” We cranked up the Octane channel and away we went…but not before some rank gas station coffee and snacks.

Reminiscing of fish stories and other good times the drive to the lake went by pretty fast. As we approached the Shannon ramp on Canyon Ferry, you could tell we were both ready to get our jigging arms in motion. It’s funny how a lot of people perceive spin fishing…if you watched our boat you would see the sweet poetry of Norman Maclean. It is actually very similar in nature to casting a fly line in how you mend the line and use feel and vision to master the art. Believe it or not, the ‘Johnson Jig’ is a form of art….that slays giant water beast! Now that you’ve had a taste of my colorful side we will get back to the nuts and bolts. As we worked one of our favorite points my line “slapped” the water with ferociousness that only a certain fish will deliver. Setting the hook I yelped, “Jeff, that one ripped it man,” and I proceeded to land a chunky 17” walleye with a big crayfish in his tummy. Jeff and I poked at the crayfish in his belly a few times, talking of his veraciousness before letting him go and proceeded on. It wasn’t ten pitches later and Jeff hooked into something with some shoulders that instantly retreated to the safety of a cabin dock rope. After a couple gripes and groans we knew we were going to have to get really lucky to get the fish untangled from the dock anchor. After spending a fair amount of time, Jeff felt the fish come unbuttoned and up the cable we watched the perch glass minnow come. “Crapola! Sour pants! Twisted mosquito bites that sucks!” I said as we motored in to retrieve the jig.

Spending about three or four more solid hours chasing the shallow water pitching bite, it started to get HOT! We decided it was either time for a change or time to head back to the ramp to retreat from the sun. Of course, since we were already out on the lake we voted to stay and headed the twenty two miles to the south end to fish the willows. This is a place that I have not spent a lot of time, which almost makes it feel like a completely different body of water in general. Traveling from the dam it is almost like fishing two different lakes in a single day…BONUS!! Doing our best to keep the trolling motor off the bottom in the shallow water I was about to have doubts when Jeff yelped, “Trev, nice fish,” and before I could ready the net Jeff had an awesome walleye in the low twenty inch mark waiting for my swoop. After a quick picture we swam it free and headed deeper into what felt like the amazon jungle. There was honestly a few times I felt like we were deep in the rainforest fishing for peacock bass, but Jeff was quick to remind me there were no monkeys present. Setting my sights back on the golden Montana version of some awesome amazon jungle fish we pushed on. And then it happened, and it happened bigger than stepping in a fresh cow pie with new boots.

I pitched my glass minnow into the willow edge of a current break and started working it back to the boat. As I explained to a friend of mine later, it is crazy how when fishing one can perform perfectly, yet be so far into a subconscious oblivion that it takes a walleye of a lifetime to smack his jig. Whelp, that is exactly what happened folks. And before I start the story behind this awesome fish I want to point out that I have spent a million hours fishing critically and also some pretty hairy stuff to come across fish like this. It is funny how it can happen, a guy is out with his best friend having an awesome day relaxing when all of a sudden he catches the biggest Montana walleye of his life (and a summertime fish ta boot).

As I lifted my jig on about third or fourth pull from the willow edge I felt that DELICIOUS “thump” and I set the hook. Feeling for only a moment it was a big fish it dove instantly to the bottom. Keep in mind, we were only fishing in twelve or so feet of water. As Jeff went for the net I started to get worried as I couldn’t move the fish from the bottom. With so many willows I thought the fish must have twined itself around them and that was that. After about a thirty second stalemate I reefed on the fish a little harder than I should have and…OH MY GOSH JUMPING JACK WALLEYE FLASH the fish started to come up and it was just as heavy as what I thought was a willow bush. This is the point in the story where no words can describe the feeling one has at this moment. It is why we spend countless hours of our lives chasing dreams in hopes of feeling the very sensation I had on the end of my line. I gasped at Jeff, “Dude, this is going to be a HUGE freakin’ toad beast of a fish,” and it wasn’t a second later she appeared in the stained water. Let’s just say it’s a good thing she stayed on or we would have called her twenty pounds…holy sow cow she looked big coming in. I can still hear Jeff as clear as day shouting “OH MY GOD, OH MY GOD, OH MY GOD”. Looking at the size of the fish compared to Jeff’s net I was pretty skeptical but hey, I have confidence in what is supposed to happen. Then like a pro from Dover, Jeff swooped the giant hen into the net and it instantly started to break and the jig came free. Grabbing the end of the net we landed the giant walleye in the boat and stared in absolute disbelief…how blessed were we to have this opportunity together?! We had just caught a walleye over fifteen pounds in the July heat under the Montana sun. Life doesn’t get any better than that right?!?! Or does it?

As you all know me I am a huge catch and release freak-a-saurous rex and after we came to our senses, we quickly dunked her into the live well to make sure she was doing well. I can still remember looking down on how wide she was across the back and how huge her silver dollar eyeballs looked. Talk about the good stuff man…I couldn’t wait to let this big gal go. As I talked of letting her go, Jeff said, “Man, I don’t think I could ever keep another big walleye after seeing you so passionate about letting her go.” Knowing that Jeff wouldn’t keep one anyways; it is the right thing to do and in my deepest most sincere hope is that I can get as many people as I can to release the important fish. I have a couple very insanely large walleye on my wall and it still haunts me keeping them. Like I have said before, from shooting big bulls at point blank to jumping out of perfectly good airplanes…releasing a once in a lifetime (or any fish over 20”) is a rush unsurpassed by any. It is such a feeling of greatness, I beat this awesome old smart fish and I can put my hands on her and give her a big smooch then release her to have to sulk about it…that’s what I’m taking about!!

Jeff and I were all smiles as we decided to make the long boat ride back to the north end. And being hotter than a cow elk in estrus, it felt dang good to have the wind blowing in our faces. I was actually so excited from the day I had to borrow a Copenhagen chew from Jeff to calm my nerves. Doing the trick I kept my fingers crossed that is all it would do. The last time I tried this Jeff was headed for shore and having no toilet paper on board let’s just say I owe Jeff a boat towel!! Ramping the boat on and heading home we had laughs and high fives for an awesome day under the big sky. After saying goodbye to Jeff and heading home to the wife and dogs I thanked the lord for such an awesome magical day. Entering my neighborhood and rounding the corner I saw something in my driveway and almost crashed directly into the ditch!! No way, could it really be……..to be continued 🙂