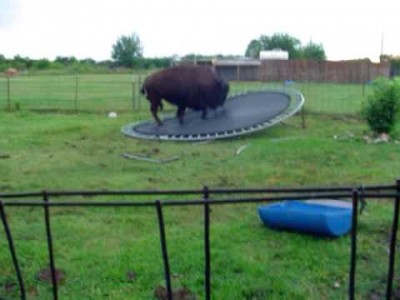 Bison VS. Trampoline
By angelamontana

So, you have seen what elk do when they encounter a trampoline, but have you ever wondered what bison would do?  If you are one of the few who have wondered that, your curiosity can be put to rest by watching the video below.

The featured bison, known as WILDTHING, had just gotten done acting as the best man in a vow renewal ceremony back in June of 2008 when this footage was captured.  WILDTHING apparently gets birthday parties, along with cake and streamers, and he is quite the basketball player, according to his owners.  WILDTHING is no ordinary bison, as he is quite famous, having contracts with America’s Funniest Home Videos and is associated with Ripley’s Believe It or Not, and he even helps raise money for things such as pet adoptions and promotes chili cook-offs.

Take a look at the video below to see if WILDTHING does what you expected he would do: