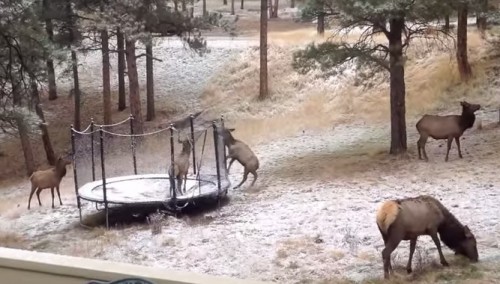 Snakes on a Plane? NO! It’s Elk on a Trampoline!
By angelamontana

So, here is some footage from Evergreen, Colorado that a family recorded after noticing elk in their yard…only, one of the elk youngins poked his head into the trampoline area and decided to jump in.  Here’s what they had to say about the unusual incident:

OMG – Just when you thought you had seen it all…….and we see a lot of crazy Elk behavior here in Evergreen, CO….but this Takes The Cake for sure! We were just sitting down for our morning coffee when I watched this young elk poking his head into the entrance of the trampoline..when all of a sudden he decides to jump in for some fun! Getting out proves to be a bit harder than getting in!!!The Elk’s friend on the outside actually looks like he wants to get in and join the fun while the Mom looks on.For any viewers offended by my wife’s comment on the notion of shooting it….the only reason my wife suggested doing so was to keep it from suffering if it got too badly hurt due to the hole in the tramp. We recently watched in horror as a fox was strangled to death in our neighbor’s soccer goal netting. My reaction to her comment gave her the reality check she needed as she was a bit over-reactive due to her sensitivity to its wellbeing and not wanting to see it suffer like the poor little fox! Hope you enjoyed the video!!!