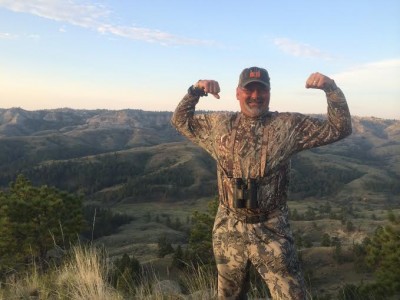 Last week I was in Eastern Montana hunting the Missouri Breaks for elk with my bow. It is the fourth year that I have hunted with Burke Ranch Outfitters in September. Their elk camp is located approximately 50 miles to the southeast of Malta. Every year the pattern of the elk located in the area changes, depending on the weather conditions and hunting pressure. Most years it is hot with temperatures in high 70’s to low 80’s. Because of the warm temperatures we like to get out early which means a wakeup call at 4:30am. Even though Burke Ranch offers tree stand and blind hunting the most successful method is either spot and stalk or setting up and calling the elk in.

By the time the week is over I figure that I have walked close to 50 miles up and down the breaks in search of finding elk to hunt. Until you actually walk in and out of coulees and up ridges that stand tall over the lush creek beds, you don’t realize how many spots that the elk can bed down and be hidden away from your eyes as you glass the area through binocular. One major change in the hunting conditions this year was the presence of mosquitoes. Kelly Burke said the last year that the bugs had been so bad in September was way back in 1997. The return of the mosquitoes were the result of the record moisture that Eastern Montana received at the end of August this year, and believe me when I say, “They were everywhere and it made it harder to hunt”. 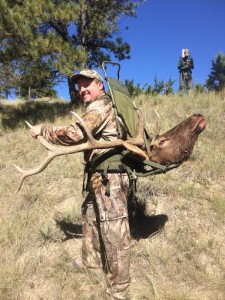 The closest I came to getting a shot off was a spot and stalk that we made on a small bull one morning. As we glassed from a ridge top, we saw a bull bed down across from a place called Wyatt Creek, about 800 yards away. It took us three hours to finally get within 50 yards of the bull, but the shooting lane was not good, and, before we knew it, he was off and over another ridge and out of sight.

The elk shooting stars did align, however, for my buddy Steve Knudson who was also part of my hunting party. Knudson, who is from Billings, has had success hunting deer with a bow but has never harvested an elk while archery hunting.  He was hunting with Kelly Burke on Sunday afternoon, and Burke located a bull while calling with his bugle. The bull was with six cows and a couple of calves about 1000 yards out. All of a sudden, with the invite of a combination of elk bugle and cow calls from Burke, they began to move in their direction. Burke had Knudson set-up in front of a tree on a plateau about 20 yards in front of a coulee.

In no time, as Knudson remained totally still, the two calves came within 8 yards of him. They were followed by the cows that looked right at him at 20 yards, but kept on going. Trailing his harem, it was the bulls turn, “I first saw the tip of his horns and then all of his horns as he stopped behind a bush and let out a grunt that peeled the hair back on my face and made it stand up on my neck”. With that grunt, the bull moved and exposed his entire body, and Knudson made the opportunity count with a shot that piled up the 6 point bull elk about 150 yards away. 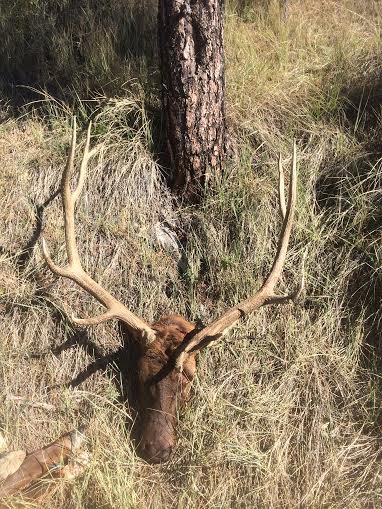