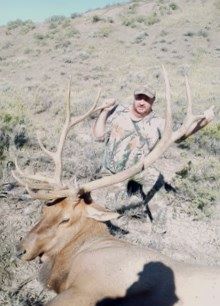 (Justin Bonomo and his bull – Photo via Burke Ranch Outfitters)

The general archery season is underway and some hunters are finding success. Justin Bonomo, my hunting buddy from Forsyth, scored on opening day at 10am. Bonomo who is no stranger to success with his bow knocked down a nice 6×6 bull with a 40 yard shot while he was hunting with Burke Ranch Outfitters.

The cooler weather is great for elk hunting and by the reports I have been receiving the bulls are starting to go crazy. I plan on elk hunting south of Malta beginning Saturday for a week so as you might imagine I am pretty excited to try my luck again this year with Kelly Burke. I took a break from my bow hunting preparation to fish on Holter Reservoir Monday. I had been over a couple of weeks ago and had some really good luck with the walleyes. This time I wanted to see if the fall trout bite had started. Dave Montelius and John Hermes from Missoula joined me. Things were looking up for us before we got to the reservoir. 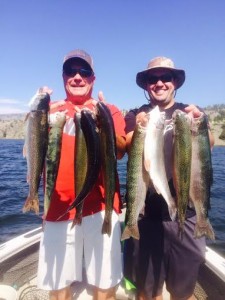 We stopped at the Canyon Store in Wolf Creek ,and I asked the gal behind the register how the fish were biting. “The fish are biting okay”, she said. What about the trout? “Oh you are fishing for trout? I think all you have to do is drop a line with a hook in the water”. As we discovered a short time later on the water, it wasn’t quite that easy but with the proper lures you could come pretty close.

We headed to the area by Cottonwood Creek up river from Oxbow bend. We had two rods with monofilament long lined out one was trolling a J-7 fire tiger rapala with an orange belly and on the other line we attached a jointed perch rapala. The two downriggers each were placed in 10 feet depth and one had a syclops fire tiger and the other trolled brookie rapala.

We stuck one more rod out the back of the boat with leaded line put it 3 colors to the water and trolled a small red flatfish. For the first hour or so the only rod that caught fish was the long lined fire tiger J-7. We had a couple of hook ups on the other rods but nothing like the fire tiger. We switched the other long line rod to fire tiger and it started to catch fish. We adjusted the downriggers up a couple of feet to around 8 feet depth and they started to catch trout. So it seemed that the trout were running in the 6-9 feet depth of water. We trolled right at 2 miles per hour. Slower speeds didn’t work quite as well as a faster trolling speed. The surface water temperature was 60 degrees.

We ended up hooking and catching over 40 trout. You may view a picture of part of the good sized 15 trout we kept on montanaoutdoor.com Last year I spent several days in September fishing for trout on Holter and didn’t have as much luck as we did on Monday. So if you are looking for a lot of action then I might suggest Holter, Hauser, or Canyon Ferry. September is a great time of the year for trout fishing and all three lakes are producing well.