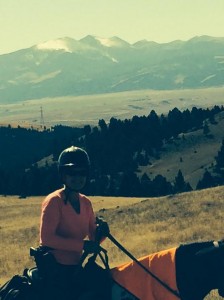 A person’s words can have a major impact somebody’s life, and  the company of an animal can change perspectives.  Berny Croy, of Missoula, realized not only how much her horse, Sarge, has taught her, but also how impactful words said to her years ago could be to her life today.

Here’s Berny’s story in her words: 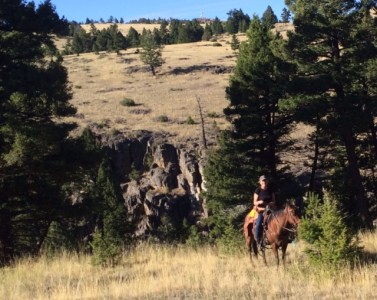 Six years ago, I had the pleasure of taking 10-12 lessons with a trainer, when i  first  got Sarge.  He is 10 now.  I have learned so much from Sarge.  I have mostly learned to be sensitive to others, not just animals.  They can feel a fly land on their back–every move or touch you make affects them.  But, one of the best lessons I learned from the trainer, I had not really identified until recently.

When Sarge would be uncooperative , such as refusing to go down the trail, he would, buck, crow-hop and even stand straight up right.  The trainer told me “Don’t look down, keep your head pointed the direction you want them to go”.   So, time went by, and I recently had a young friend express some worry and concern for their short term future,  and from out of nowhere I remembered what the trainer had taught me, so I told my young friend, “Don’t look down, Life is just like riding a horse, If you look for some place to fall that is most likely where you will end up. Keep your head up and your eyes on their ears, then you can see exactly which way they are going to move.”

Con, thanks for the great lessons, you taught me more than I realized.

Years later, Berny is still riding and learning from Sarge and others.  She and her good friend, Katie Ward (pictured), with her trusty companion, Traveler, went for a beautiful ride to scout out hunting grounds at Spotted Dog the other day.  Although the duo saw no signs of elk, they still had an awesome day.

You just never know when somebody or something will impact your life! 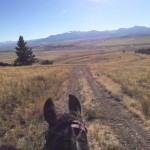 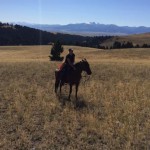 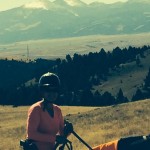