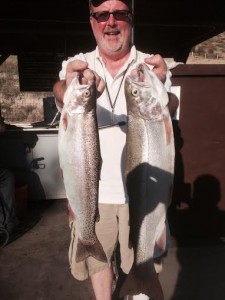 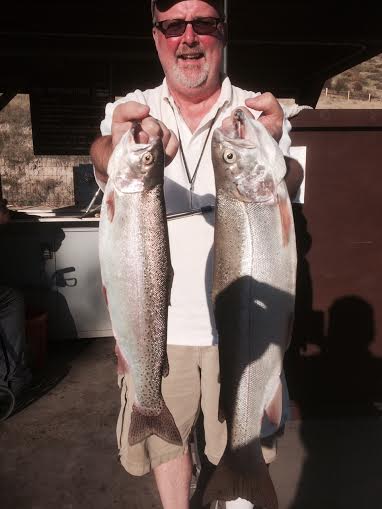 Matt Mackinaw with a couple of nice rainbows

The Captain and Matt Mackinaw fished Holter Reservoir yesterday under blue skies and hot temperatures.  The air temp got into the high 80’s, but the water temp was only 57 degrees. The trout started to bite right away, with a couple in the boat, but the bite shut off as sudden as it began.

They had a few hours of only a few bites so they moved from the Cottonwood Creek area down river to Split Rock. There was nothing there, so they headed for the cliffs straight across from the lower campground. It was 2:30, and they either found a school of trout or the trout started to turn on.

They ended the day with about 25 trout and kept 10 nice size trout, with the largest being 21 inches. Firetiger rapalas and orange and yellow seemed to be the colors. They also had some luck with a yellow/orange macks lure smiley blade tipped with a nightcrawler. They were trolling 2 mph.

Bob Culp from Frenchtown and his Uncle Al were also fishing Holter on Wedensday, and they also caught their limit of trout. A couple of fisherman from Great Falls had some nice size perch at the cleaning station. The Captain didn’t hear of any one catching walleyes. 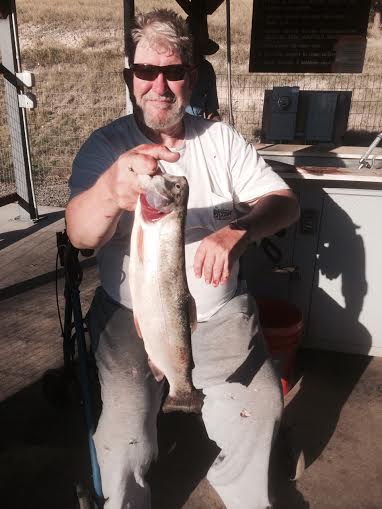 Bob Culp with a nice rainbow