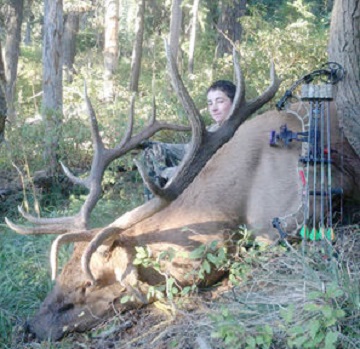 A Superior Montana hunter recently took a massive bull elk, with archery equipment. The best part is, he is only 14 years old. What an amzing bull for such a you hunter.

According to the Clark Fork Valley Press

Wyatt O’Day, 14, took the enormous trophy on a recent hunting trip with his father, Mark, who has been hunting and guiding the woods of Mineral County for years. It was also the first elk Wyatt has successfully harvested.

O’Day said, while he has only been bowhunting for a few years, he has been walking the woods with his father since he was a young boy.

O’Day said he didn’t get the elk the first time they saw him on the first day of the season in early September. He said it wasn’t until the second time he caught a glimpse of the animal that he had a clear shot.

“The first time, it was too thick and I couldn’t see him,” O’Day said. “On the third day, we went into the same area and we knew he was there. He wasn’t answering the bugle so finally we popped up over this ridge and I could hear movement. We looked and saw his antlers moving. I drew, shot and got him at about 40 yards.”

O’Day said he and his father knew they had a large animal on their hands but it wasn’t until they got close that they realized just how massive the animal was. O’Day said the time from letting his arrow fly to his first up close look at the animal was tense.