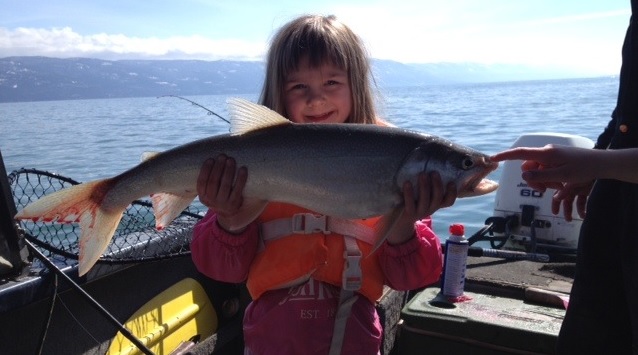 Mack Days anglers have turned in 4,118 lake trout entries during the first nine days of the twenty four day event. Total entries on a calm beautiful day Friday were the largest over the weekend with 848 lake trout entries turned in. Saturday was a windy rough day on the water with fewer anglers who were able to find areas where they could ride the waves and still fish. A total of 239 entries were turned in. Sunday was a little calmer but more sporadic winds made it harder to stay on the fish. More anglers turned in entries on Sunday totaling 412. Mack Days are sponsored by the Confederated Salish and Kootenai Tribes and are used as a management tool to slowly reduce non-native lake trout and improve the balance with the native bull trout and westslope cutthroat in Flathead Lake and is consistent with the Flathead Lake Co-Management Plan. The event is sanctioned by Montana Fish, Wildlife, and Parks. The totals for the 2014 Fall Event compare to 2012 numbers of 4,259 after nine days but are much fewer than the 2013 numbers of 6,809. Several thing affect numbers the main one being the weather. Wind is the enemy of the anglers and we have had several days of it during this event.

Up to $125,000 in Cash and Prizes will be awarded on November 16th to the anglers. All it takes is one fish to be entered in the lottery style drawing. There are several ways to win including largest lake trout, smallest lake trout, top ten anglers, ladies category, youth categories, lottery drawing, etc. Go to the www.mackdays.com website to find information, fish ID, pick up times and places, and entry forms. Entries continue to be taken until the last day of the event and there is no entry fee. Anglers can fish Fridays, Saturdays, and Sundays until November 16th anywhere on Flathead Lake.

The Golden Oldie (ninety eight years young) angler of the event, Stan Tattle of Polson, turned in a fish on Friday. Larry Karper of Florence is first in the 70 and Over category with 191, 2nd Glenn Hoffman-Missoula-57, 3rd-Jim Hoover-Whitefish-54, 4th-Ralph Johnson-Columbia Falls-30, 5th is a tie between Bernd and Susanne Albrecht of Polson-each with 18.

Youth angler Aaron Haynes of Arlee leads the under 12 group with 10, Elly Tripp of Stevensville has 3, Dusty Haynes-Arlee-3, and Ayden Tripp-Stevensville-2. Myles Tripp leads the 13-17 group with 11 and Kobe Cox of Charlo has 7.

Laurie Kreis with 135 is followed in the ladies category by Julie Vacca of Florence with 41, Jeanee Mooney of Missoula with 40, Debra Pike of Kalispell-29, and Kim McMillie of Ronan with 23.

Be safe and wear your life jackets (PFD). Have rain gear, safety equipment, cell phone, etc. on board and properly stowed. Be aware of weather conditions and watch for changes.