Camping in Comfort! (by Montana Grant)
By angelamontana 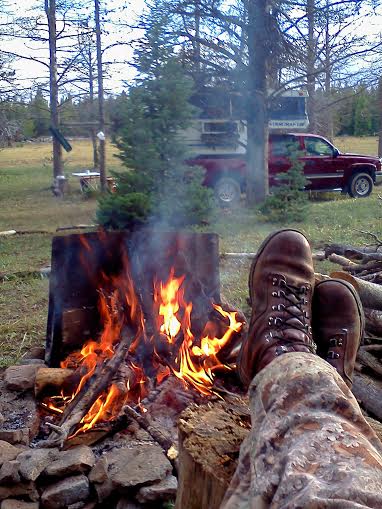 The challenge when camping is to make camp life comfortable and luxurious! Anyone can “rough it”, eat hot dogs, and drink beer. What’s the fun in being a “camping slob” The trick is to make camping so much fun that your wife will want to go again!

Camping has changed so much in the last 20 years. Most campers seem to have evolved into monster 5th wheel, super campers with generators and plasma tv’s. Buddy, that’s not camping!

My last fishing trip to The Bighorn River in eastern Montana was the perfect example. My son and I had decided to camp and fish the river. I had a slide in camper that fit into the bed of my Chevy truck. Big beds, refrigerator, a table and heater, what else could you want? After a day of fishing, we decided to have a campfire where we could cook our steaks and have S’mores. While we sat around the fire, we could hear the constant, annoying hum of ……. Generators!

Every other camper was inside their “Yuppie trailers” watching movies on their 50 inch flat screens! They had no clue that their noise was interrupting our “real camper” experience. As my son and I began to make S’mores, a few campers began to creep out of their “wussy-mobiles” and became curious.

One camper asked how we plugged in our campfire. I told him that it was a real fire with burning wood. They were amazed! I showed him a marshmallow and gave him a cut cottonwood stick. He was roasting a marshmallow like an expert in minutes. “The graham crackers and Hershey bars are on the picnic table”. Before you knew it several “Yuppie campers” had unloaded their crews into our campfire. We started telling stories and celebrating the true camping life. Surprisingly, all of the “Yuppie campers” knew how to camp but they just got lazy.

Comfort, when camping, is the smell of a campfire, the sounds of nature, and the fun of making new friends. Simple treats save the day. “Roughing it” is just fun.

One camper shouted, ”this is so much fun”! Another shouted, “what’s that stupid, annoying, humming noise that’s ruining our campfire.” Suddenly they knew…