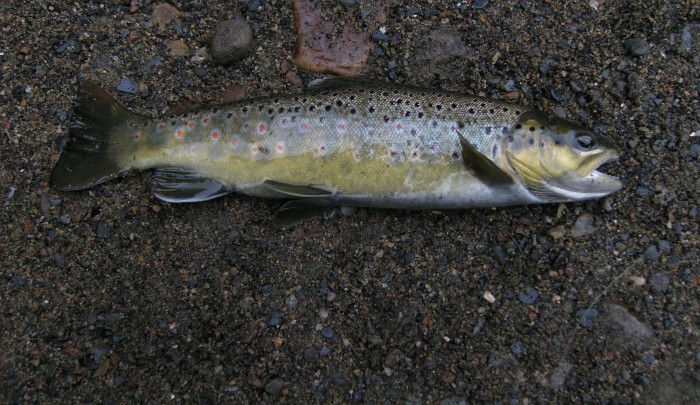 After reports to Fish, Wildlife & Parks (FWP) early last week of dead brown trout in the Big Hole River with a fungal infection, FWP crews have been closely monitoring the area affected.

A week later, crews floated a six mile stretch from Salmon Fly FAS to Brownes Bridge and noted 56 dead brown trout and three other live brown trout that were infected with the fungus.

Crews then electrofished several areas to get an assessment of the health of the local brown trout population. Of the more than 200 spawning adult brown trout collected, only two collected had the fungal infection. The remaining 200-plus brown trout observed were healthy.

All brown trout in Montana are susceptible to fungal infection this time of year, especially considering their high densities and the stresses of spawning and competing for food. Population numbers for brown trout are at a 45-year record high in the area.

The Fisheries team estimates that less than five percent of the brown trout population in this area of the Big Hole has died due to spawning related stress and high fish densities (the fungus is not the cause of death). This equates to around 35 dead brown trout per mile on average.

In addition, sixty fish (brown trout, rainbow trout and mountain whitefish) have been sent to the U.S. Fish and Wildlife Service Health Lab in Bozeman for further disease testing with results expected by the end of November.

FWP is organizing a float with volunteers on Tuesday, Oct. 28, to remove as many carcasses as possible between Maiden Rock FAS and Brownes Bridge FAS. This effort will allow FWP to get a more accurate count of the dead fish, as well as improve the ability to detect if new mortalities are occurring. This monitoring will help FWP determine if the mortalities are continuing and to determine the mortality trend.