Do you love the outdoors, but being in the water is more compelling to you than being on land?  Are you a diver who would love to not have to worry about that bulky oxygen tank and the idea of breathing under water is appealing to you?  Would you try breathing under water without an oxygen tank if possible?  If your answer was yes, then you might be interested in checking out the following from a recent article from mic.com:

A group of scientists from the University of Southern Denmark have developed a crystalline material that absorbs oxygen from the surrounding environment, both water and air, and stores it for future use.

The aptly named “Aquaman Crystal” uses cobalt to work its magic, and it doesn’t need a lot — just a few grains provides enough oxygen for the first breath. As the research team notes, because the material can continually absorb oxygen from the water, a diver would only need to bring a tiny amount underwater in order to breathe without a tank.

“It is also interesting that the material can absorb and release oxygen many times without losing the ability,” said Christine McKenzie, one of the scientists involved with the project. “It is like dipping a sponge in water, squeezing the water out of it and repeating the process over and over again.”

Eliminating oxygen tanks for divers alone is not the end of the possibilities here, either.  Patients with lung issues that require the use of oxygen could benefit from this material, too.  Would you be interested in trying it if it were made available to the general public? 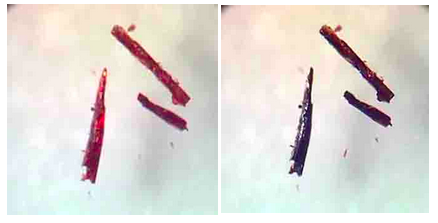 The crystalline material changes color when absorbing or releasing oxygen. Crystals are black when they are saturated with oxygen and pink when the oxygen has been released again.