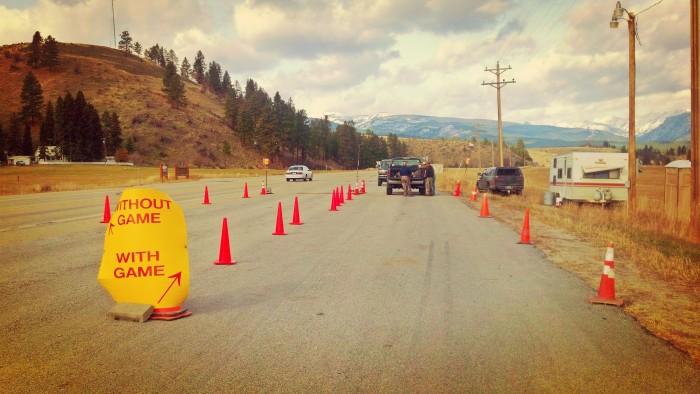 The Darby hunter check station will resume operation for the 62nd year when Montana’s big game hunting season opens on Saturday, October 25, but long-time hunters will notice a difference.

For the first time since 1953, Montana Fish, Wildlife & Parks (FWP) will operate the check station on the weekends only.

The switch is mostly a matter of making the best possible use of time and money, brought to a head by a temporary staffing shortage, according to Mike Thompson, Region 2 Wildlife Manager. Three out of four of FWP’s Region 2 biologist positions are vacant at the start of this hunting season.

“There’s no question that we simply don’t have enough people and time to spread around this year, even with the generous offers we’ve had from local volunteers,” Thompson said.   “But even when we are fully staffed, we only have one wildlife biologist to cover the Bitterroot.”

FWP can get most of the benefits of the check station and not compromise data sets by running it on weekends, when most of the traffic occurs. For that same reason, FWP made the shift to weekends-only operation at the Bonner Check Station in 2009, and the Anaconda Check Station has been open only on weekends for many years.

At Bonner, as planned for Darby, the long-term data set was preserved by subtracting the weekday harvests in previous years, with little loss of value in the harvest trends.  Hunter counts and harvests checked are much lower during the weekdays, compared with the weekends.

FWP relies largely on data collected in the statewide harvest survey (conducted by phone after the season), rather than check stations, to set hunting seasons. The telephone survey accounts for harvest that check stations cannot, such as animals harvested in archery season or by those that do not pass by check stations on their way home.

Still, hunter check stations have their unique purpose and value.   They are important for sampling the ages and health of harvested elk and deer, and especially valuable for talking with hunters and learning from their experiences, Thompson said.

“Our weekend only schedule will preserve most of the benefits of the Darby station,” Thompson said. “Still, seeing the station open every day is a part of hunting season tradition for many people, and this will certainly be a change that will take some getting used to.”