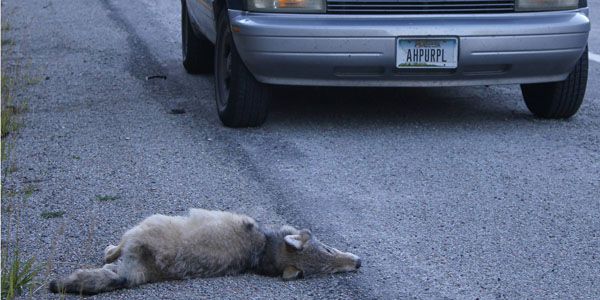 Montana Fish, Wildlife & Parks ended its investigation today into a Facebook posting from Missoula resident Toby Bridges, where he claimed to have killed a wolf and injured another with his vehicle on Interstate 90 just east of the Idaho border. After having the Mineral County Attorney’s office review the investigation, FWP will not be filing any charges in this case.

FWP was first notified of the Facebook posting on September 17, and game wardens initiated an investigation the next day.

“In Montana, harassing or intentionally killing wildlife with a motor vehicle is illegal, and we take reports of such incidents very seriously,” said FWP Warden Captain, Joe Jaquith.

On September 18, wardens investigated the area described in Bridges’ online account, and found a wolf carcass off the shoulder of the road that was consistent in size and color with the online photo. The carcass, however, was far more decomposed than typical for a wolf killed at the time Bridges reported to have struck the wolf.  Wardens found no physical evidence of a collision on or near the Interstate.

Wardens also searched surrounding hillsides for signs of the second wolf that Bridges claimed to have hit and injured.  They could not locate any signs of a carcass or injured wolf, including evidence of blood, tracks, hair, odors, or scavengers.

Wardens interviewed Bridges and used his photographs from the scene for further investigation by other law enforcement officials and wildlife specialists.

A Montana Highway Patrol crash scene investigator analyzed Bridges’ photograph from the scene and concluded that based on the photograph, the vehicle had not been involved in an accident. No accident report had been filed.

Wardens searched for potential witnesses and worked with the Montana Department of Transportation as part of the investigation, but no witnesses came forward.

“In typical cases involving harassment or killing of wildlife with a vehicle, there has always been either a witness to the event, and/or fresh physical evidence that could be directly tied to the violation,” Jaquith said. “In this particular case the only witness appears to be Mr. Bridges, the vehicle shows no evidence of having been in an accident, and the lack of any other physical evidence supporting the claim precludes the filing of criminal charges.”