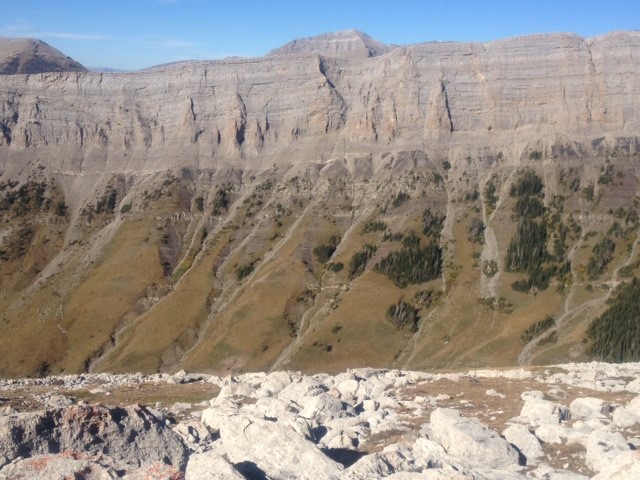 Having Fun (by Trevor Johnson of Kit’s Tackle)
By angelamontana

I had such a bittersweet experience the other day heading in the backcountry I thought I would share. It is encounters like this that puts you, alone, in the depths of Montana’s wildest haunts and it is as pure as nature can get. It is the memories engraved in my mind forever that keep me coming back to these uninhabited and remote places. And speaking of wild places…here is a quick recap from a couple weeks before the story. A friend of mine and I got a wild hair and backpacked into the rocky mountain front. As we were crawling over rock ridges in the middle of the night in 60 mph winds to get to the sweet spot my friend Robbie looked back at me and said, “Dude, there ain’t nobody doing this kind of stuff,” and then gave me a big smile. I admit it was the first time in my life I was hunting with a pal tougher than me…or crazier I should say! With the way my luck has been going this year; we got to camp to find my peep sight had popped out…after packing back in for five long hours!! All a guy could do is smile and laugh at that point…what a ninja kick straight to the cojones!! My friend Rob on a separate trip ended up killing a bull grossing over 400’’ though…so the saying goes “persistence pays off.” Or so they say;) Now, back to my backcountry day.

I’m sure all my neighbors were shaking their heads when I started my truck at 2:45 AM and headed out of the subdivision. With the Octane channel cranked and rocket fuel coffee steaming hot, I headed for the trailhead. It is always a bit daunting heading through this kind of country in the middle of the night by yourself but I was excited to have the light of the full moon on my side…or so I thought! About the time I was getting close to the trailhead it got dark…and I mean as black as my coffee dark. The moon was gone; what in the hell I thought to myself? Since I was already there I wasn’t backing down now…even though the world could be ending!?!? Come to find out, and what turned into an amazing show traveling through the mountains, there was a lunar eclipse. Finally, about half way into the Scapegoat, a touch of the moon appeared along with a luminescent blood orange glow ring around it. I stood there in complete and utter disbelief of the experience I was having. I had goose bumps exploding from my arms and hair rising on my neck. It was the perfect 50/50 mix of grave excitement and sheer terror! 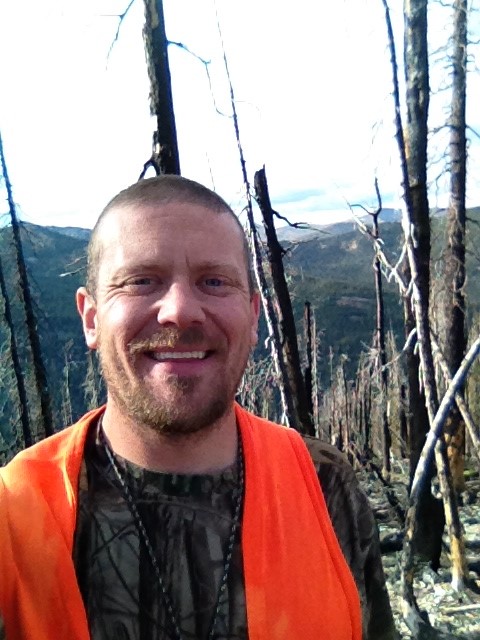 Mustering up a smile before heading out of the wilderness!

I hadn’t made it more than a mile down the trail and I looked down to a giant oversized pile of Grizzly scat. And upon closer inspection, I noticed a couple of deer hooves in the pile. “Are you freakin’ kidding me,” I thought to myself. Not only am I a glorious two legged pile of steaming Yeti bait walking up the trail, now I have a deer devouring grizzly bear on my turf. And this is where I made the mistake you should never make!! I have a high beam headlamp and I hadn’t shined it up the hill three times and there was a set of beady eyes locked onto me. Let’s just say Trevor came pretty close to shooting the woods apart! I then put my head down, told myself it’s not real, and kept on bushwhacking and thrashing through the sh^thole ahead. With a couple hours before daylight yet, I knew I had to keep the ghouls and goblins and wabooshes from taking over my mind!! Finally, making it to the head of a huge basin where things start to open up, I had under an hour until I could see.

With the legal boundary not more than a couple hundred yards away, I took a rest and admired the last minutes of the lunar eclipse. I then started up a steep creek bottom and stepped onto a dried out log that cracked and splintered under my feet. I should include it was one of those rare and magical mornings with no wind and the silence was peacefully breathtaking! Just moments after stepping on the log, I about shit my pants and dove for cover from the exploding sound of a bull elk’s bugle blasting through the silence. Followed by the classic chuckle and uprooting of a tree…I realized this guy wasn’t happy about a possible competitor in his drainage. And then, the same ninja cojones drop kick I spoke of earlier hit me right between the legs! Here I was 400 yards from the legal backcountry boundary with what sounds like a monster bull going nuts! As little of these awesome experiences a guy gets to have, I put the Scapegoat on hold and had to play with this stud. He continued to bugle, chuckle and smash trees while I waited patiently (Not nervous at all…I mean why would I be? It could be a 350” class bull and I’m going to watch him walk off).

I waited until just before light and then ripped off the biggest, nastiest, squeakiest, and horned up spike sounding bugle you have ever heard. This made my competitor very, very angry!! I then sprinted for the timber line and got up into the trees about twenty yards. I had just stopped and there he was weaving his way down the mountain to me. In the first moments of the days blood orange light, I will never forget the way his white ivory tips were illuminated along with his ghost white body. It was immediately apparent it was a big bull, and then even more apparent when he was standing at twenty yards broadside looking out into the park I bugled from wondering where the other elk was. I got to pick him apart very well and I would guess him at a 310-320” class bull which for western Montana…is a big bull. With my rifle at my side, I raised my arms pretending I had my bow and drew on this magnificent creature…I’m not saying I would have harvested him with a bow because it’s never for sure…but let’s just say I would have loved the chance. Realizing something was fishy, he finally turned up the hill and disappeared into the pines as fast as he had just appeared. There was nothing I could do but stand there in complete comical disbelief and thank the lord for the awesome experience…just like the last time it happened and was an even bigger 330-340” monster class bull…oh well:)

Recollecting myself, I picked up my rifle and my pack and headed for where I can hunt:) Now, only about a hundred yards from the legal boundary, I was quietly tip-toing from rock to rock across a slide and I heard something. Looking down the hill to my right about fifteen yards was a cow elk feeding with her little calf right behind her. I froze and followed the trail to where they were heading and I was on it! This could get interesting I thought to myself! When they were only about ten yards from me I spotted a very large bodied, pure white elk weaving through the trees. At this point I couldn’t take anymore torture so I put my focus back on the cow and calf combo. Finally, after turning around and kissing her calf they were only feet from me…I literally could have stuck out my rifle barrel and poked her. When her eyes finally met mine it was just like in the cartoons…her eyes literally shot straight out the side of her head and she crashed out like a freight train. The poor little calf never knew what happened, but was pretty sure it wasn’t good. The bull in the timber ran down the bottom so I never got to see what he was wearing for head gear…thank God 😉 Experiences like this though, both of them, are what makes it so fun out there.

I then tied my blaze orange around my eyes and felt my way into the legal boundary so I wouldn’t see any more elk. And that’s where the luck ran out. I spent the entire day covering god only knows how many miles through the Scapegoat and saw one nice mule deer buck. As the late afternoon sun pelted down on my face, I knew it was almost time to start heading back out. I was in deeper than I had ever been in a day hunt and realized I was going to have to turn superhuman to get out. I dug around in my pack for a five-hour energy and a snack…and I was on my way. Nothing is as beautiful as the Montana backcountry in the month of October though…God’s paintbrush creates a burning canvas of splendor. As I hunted out the ridge back to the border I felt very blessed to be able to make it this far and also for the amazing day for the books! This is what I call, having fun!! 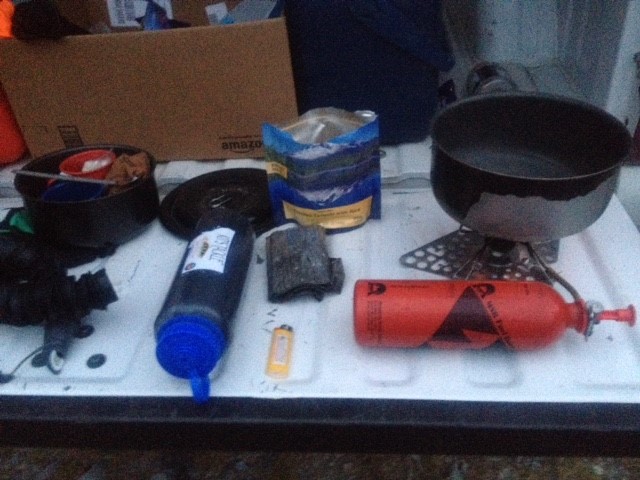 Solo freeze dried celebration back at the truck!!