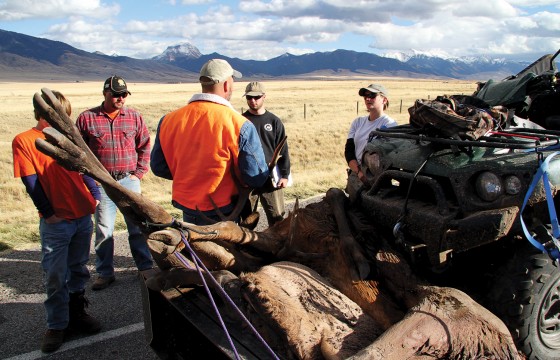 MILES CITY–Hunters stopping at various Fish, Wildlife and Parks check stations throughout southeastern Montana consistently report having a positive experience and an increase in the number of antelope, deer and elk observed during their hunt compared to last year.  Check stations are run specifically for antelope in Mosby, Hysham and Broadus.  Stations run during the general deer and elk season are usually run out of Glendive, Broadus, Ashland and Hysham.

Hunters traveling through the Broadus station earlier this month over the antelope general season opener experienced a 75% success rate, while hunters in the Hysham/Colstrip/ Forsyth area had 56% success.  Hunters afield reported to biologists that high numbers of antelope were present in the Alzada, Baker and Plevna areas.

During the general season opener for deer and elk success varied across the region.  “Opening weekend varies every year,” says Bernie Hildebrand, FWP wildlife biologist. “Some years more game is taken than other years. Weather is always a key player in hunter success.”

Steve Atwood, Forsyth area wildlife biologist, reported that most of the deer hunters coming through the Hysham check station reported seeing more mule deer this season that the previous couple of years, adding that “a lot of mule deer does and fawns are around.”  Overall hunter success rate was low (14%) as a result of warm weather and hunters choosing not to fill their tags in hopes of another opportunity this season.

The Glendive check station reported a similar success rate (16%) with hunters making very similar observations.  Melissa Foster, Glendive area wildlife biologist said, “Although harvest was low, folks were reporting seeing lots of mule and white tailed does, fawns, little bucks and nice bucks but chose not to fill their tag the first weekend, didn’t get a shot or missed.”

No elk were brought through a check station over the weekend; however, many reports of elk being harvested at various locations across Region 7 have been made.

Bird hunters continue to have good success and are reporting good/average numbers.  Many of them also stated that they had experienced good bird numbers in FWP Region 6 and North and South Dakota.

Overall 134 hunters were checked throughout the region over the weekend.