Pump or slide action rifles (pumps) have been around for about 140 years. Like the lever action rifle, pumps are pretty much a uniquely American firearm. The rest of the world has had little enthusiasm for the pump rifle, only the FN Trombone, a Browning 22 caliber design has shown any popularity with European shooters.

The first truly commercially successful pump rifle was the Colt Lightning. It was produced for 20 years between 1884 and 1904. The gun was chambered in several calibers, the most popular being .44-40. It made a great companion rifle to the Colt SAA revolver chambered in the same .44-40. Today, replicas of the Lightning are very popular in Cowboy Action Events. Both Pedersoli and Uberti produce Lightnings; the most popular chamberings being .38 Special/ .357 Magnum and .45 Colt. 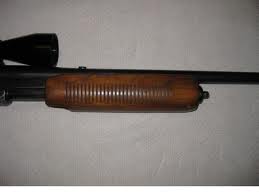 Probably the most successful pump rifle ever manufactured is the venerable Winchester Model 1890. Designed by John Browning, it was chambered in .22 Rimfire and its profile is the image that comes to the minds of gun people whenever pump rifles are mentioned. It was popular for decades as the “gallery gun” of carnivals and

Today, there are few pump rifles available for American shooters. The previously menti

oned replicas for CAS events chambered in center-fire rounds are popular. Remington produces a very nice .22 rimfire chambered rifle, the 572 Fieldmaster®, and the Model 7600™, a big game pump chambered in .243 and .270 Winchester, as well as .30-06 Springfield. The 7600™ is available with either walnut or synthetic stocks. My dad owned the forerunner to the 7600™, a Remington Model 760™ chambered in .270. It was a very nice

and accurate rifle and in my youth I used it to take several mule deer. Both the 7600™ and the 760™ are magazine fed; this makes for very quick loading. One note about the 760™, it had a round forearm unlike the square one on the 7600™ and in my opinion was a much more comfortable gun to operate and carry.

Pump rifles are not very common here in the West; however, in the thick woods of the Eastern U.S. these fast handling rifles are still quite popular. With a little practice, shooters can effectively fire rounds nearly as rapidly and accurately as semi-auto shooters.

With general election is coming in a couple of weeks, I like to remember some of the words and thoughts of our Founders. Here’s one from James Madison, the “father” of our Constitution. “Americans have the right and advantage of being armed-unlike the citizens of other countries whose governments are afraid to trust the people with arms”