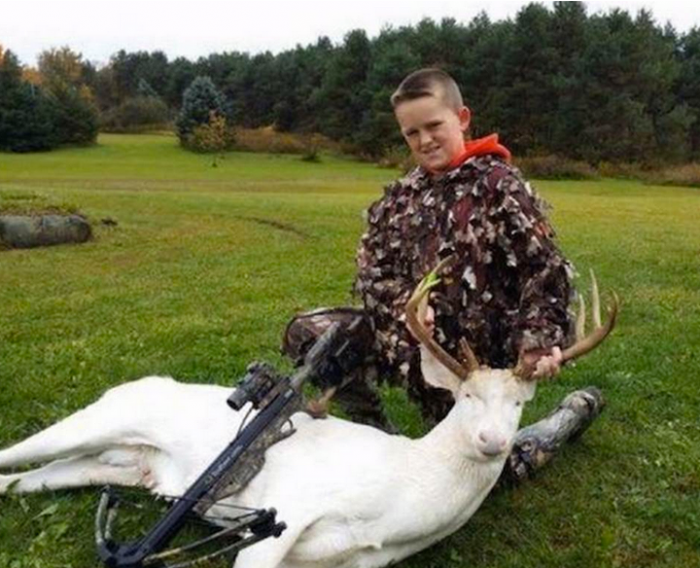 The statistics show that 1% of all whitetail deer will have a genetic mutation that can result in being born albino. Albino deer have a short life expectancy due to they lack of color that helps them blend into the environment. For an albino deer to survive 8 years is very rare. But, they are in no way unicorns. A young Michigan hunter recently harvested a mature albino buck and posted his successful hunt online. Anti-hunting groups got ahold of the photo and took the hunting debate across a line. Anti-hunters are calling the photo tragic and even going as far as to bring death threats to the young man.

The ignorance makes my head hurt. How people can judge this young man, in what may be the highlight of his hunting career. But, to call death threats on a CHILD for doing something completely legal and filling his family’s freezer.

According to USA Today

Gavin Dingman of Oceola Township took down the trophy buck last week while hunting with his father, Mick Dingman.

“He kind of feels like a rock star right now. Everyone is calling, all of the hunting shows and hunting magazines,” Mick Dingman said.

The Dingmans had spotted the albino deer several times over the past couple of years and had even snapped photos of it.

“The whole neighborhood is familiar with it. Quite a few of the guys in the neighborhood were trying to get it,” Mick Dingman said

The anti-hunting facebook page, In Defense of Animals, received their fair share of feedback after they posted the story, calling it tragic and going as far as to call the DEER a hero. If you have hours to waste, check out the nearly 8,000 comments between pro and anti hunters via the facebook page. Battle Royal!!!!!