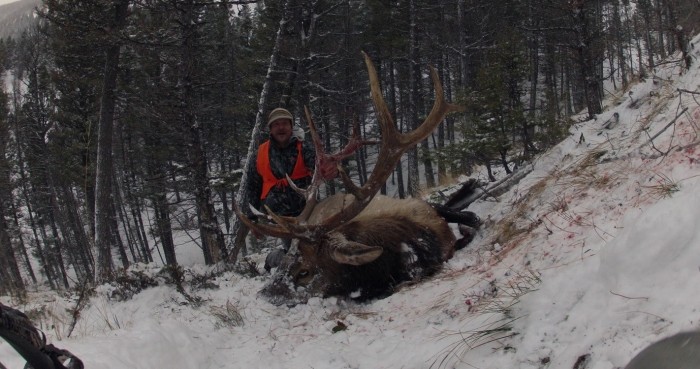 46 Bulls (by Trevor Johnson of Kit’s Tackle)
By angelamontana

I can still see him, as vivid as my hands are in front of me, standing there with steam blasting from his nostrils. His thick coffee black antlers gleamed against the snow in the twenty below zero afternoon sun. Admiring him through my rifle scope, my dad’s voice breaking the silence just feet behind me muttered in a stern voice, “Shoot him Trevor, shoot that son of a b*tch.” With the metal of the safety nipping frostbite into my finger, I pushed it forward. I could feel my dad’s relief and hear him thanking the lord I was finally going to pull the trigger on a bull. Being less than eighty yards from the magnificent beast, I zeroed in on his vitals and started to squeeze.   And then, like so many times before, I got an incredible rush knowing I had beat this bull and he knew it…I flipped the safety back on and I could feel my dad about to explode! I turned around with a huge smile and said “he’s not the one dad.”   The entire walk off the mountain that night was me reliving the awesome memory and dad wondering what the hell we are doing out here!

To clear things up a bit, I decided I would start a five year pact of looking for a forest monster. I had no idea what I was getting myself into. The years previous it seemed almost easy…NOT EASY! The most important thing I learned is that it is about the journey and NOT the destination. I’m not trying to sell myself short here, but the way I hunt on public ground without horses, the chance of me killing a 360” bull are slim. But it isn’t killing that 360” bull…it’s the chance he is hiding around the next spruce tree. And I promise there are better places to kill big bulls than in western MT, but it has become personal nowJ

The experiences I have had wandering through the mountains for five years are unexplainable. Up to the pact, when I saw a legal bull the hammer fell and it was all over. You would be amazed at how much more is behind the curtain that a person never sees. I have learned so many habits of elk, of bulls, and seen so much wildly awesome behavior. I have learned to have the utmost respect for the one animal, the one thing in this world that has kicked my butt so much, and given me so many sleepless nights! I have left over a thousand miles on the mountains I will take to the grave…and been places no man will ever stand. These moments are the 360” bull that everybody dreams of.

Since this was the first year the pact was over…I had a decision to make. I now have a wonderful family to support and the freezer has been looking pretty bare. Having a chance at a monster bull in bow season, it was hard to swallow shooting anything else, but I am a hunter and I want to harvest an elk. I was coming off the mountain one day this season and a text came through that dad had shot his bull. This in itself was so awesome…I was so proud of dad for going way back in by himself and harvesting a bull. We had a great pack out on dad’s bull and the joyful and thankful feeling of success and food on the table come winter. It was all me now…

By this time I had gone into savage mode, turning into a “ready for anything” beast. The cold had come and we had a couple of days of below zero weather. All good elk hunters know this is the time to run the mountains. It was the day before Veterans Day and I was preparing for the next day’s daylight to dark excursion. My phone started buzzing and it was my dad saying good luck and to just wander happily. So I took his advice and that is exactly what I did. When the alarm clock went off at 3:50 am the next morning I felt good. Finally reaching the end of an old dirt road the snow was blowing in ruthless hurricane abandon and the truck thermometer read seven below zero. To most folks this would be a nightmare or a morning to sleep in. For Trevor, this is a dream hunt.

Having to pee like a gunshot water buffalo, I opened the truck door and unzipped the wool pants…let’s just say I take the whole dream hunt thing back. With a gust of twenty below wind-chill filled with ice crystals biting into my manhood (if you could even call it that at this point)…I almost went home and went back to bed. Shoving every piece of warm clothing I own into my pack along with all the other cold weather emergency survival gear I grabbed my gun, took a deep breath, and up the mountain I went. Having about an hour and a half in the dark I fought off the cold by mentally thinking of that big bull that will be waiting for me at daylight. Finally reaching my ridge just in time for shooting light, my bino’s were scanning the horizon.   Working up the ridge, the day was already a success; I shot a half dozen mule deer does and a small buck with the safety on. I whispered to myself, ”It’s a kill day Trevor.” It was now about a half hour past legal, but with the cold wind against my face I knew the elk would be out longer. Wandering happily and totally content, I caught movement on the hill to my right. Then, like a fire truck with its lights on, I caught a bull sneaking back up to the timber line.

It’s this moment where every hunter goes “oh shit” this is it! Getting caught up in watching him shake the snow off his rack of horns I knew this was my bull. It was too magical of a hunt to not try and harvest this old warrior. I slid my pack off, pulled my bipod down and got into position. Since I only had a couple seconds to shoot before he would disappear forever into the timber I had no time to score him. I quickly removed my range finder from my front chest pouch and got a reading…319 yards. Working fast, I totally forgot to turn my scope up from four power from the thick timbered ridge I had just hunted.  I settled in on him and before pulling the trigger I thought about the forty six bulls in the last five years I had shot with the safety on less than 300 yards. This was my bull and my time. As the shot echoed across the crisp cold air I watched him through my scope. He stood there as magnificent as ever before going down. It was a bittersweet feeling, but I can assure you there is not a more thankful hunter in the whole wide world. I built a fire and spent almost an hour with him thanking him for his life and saying prayers. Five years of memories will forever live in that very moment on the mountain and in his set of horns on my wall. 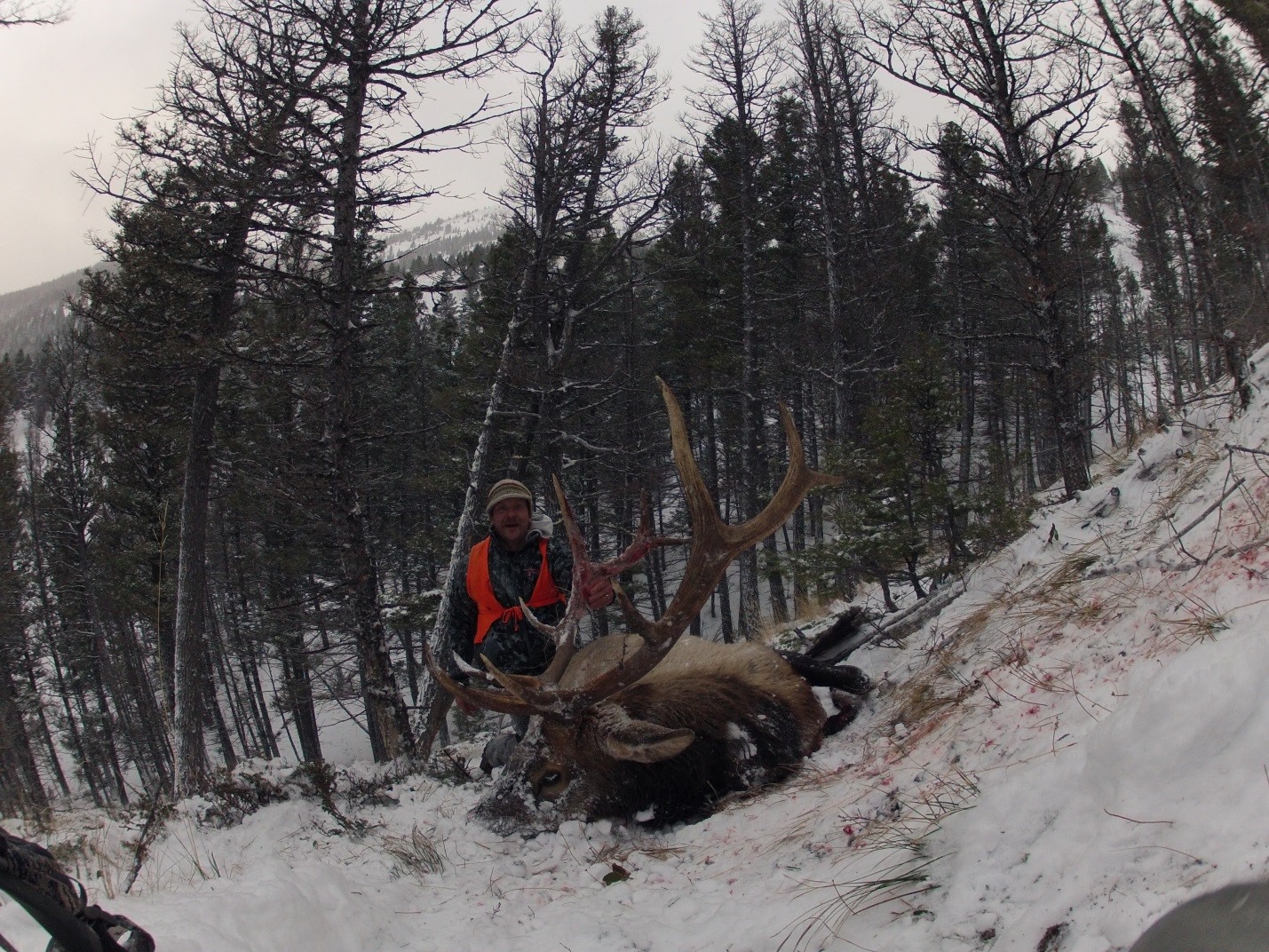