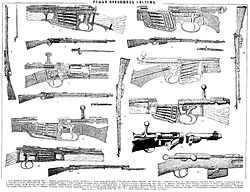 The Mosin-Nagant bolt action rifle was the main Russian battle rifle for about 55 years. From 1891 to the adoption of the AK-47 in 1948, the Mosin-Nagant served both Czarist and USSR forces as a reliable and effective combat arm. 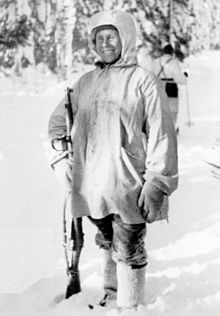 The name, Mosin-Nagant, is a bit of a misnomer. After the Russo-Ottoman War (1877-1878), where Russian troops equipped with single-shot rifles were decimated by the Turks who were equipped with repeating Winchesters, the Czar’s military decided a modern rifle was an absolute necessity. Russians Sergei Ivanovich Mosin and an obscure Captain Zinoviev, and Belgian Léon Nagant each submitted a rifle design for the trials in 1889. Initially, the more complicated Nagant design was selected. Later, the decision was overturned and Mosin’s simpler design was accepted by the Russian government in 1891. Each rifle was a unique design

and the Russians always referred to the gun as the Mosin. It was and is in the rest of the world that the rifle is referred to as the “Mosin-Nagant.” Nagant did attempt to gain some income by claiming patent infringement on the part of Mosin, but was unsuccessful. Some of the features of the Nagant design were incorporated into the Mosin over time and in the major “modernization” in 1930. Nagant did receive royalties from the Russian government when his revolver design was adopted in 1895 as the main sidearm of the Czar’s military.

At the start of WWI, the Russians ordered 1.5 million rifles from Remington and 1.8 million from New England Westinghouse. Remington delivered about 750,000 by the time the Communists took over and then cancelled payments to both companies. Nearly bankrupt

, the companies were saved by the U.S. Government when the surplus guns were purchased and used for training or given to other U.S. allies.

Millions of Mosins were produced before, during, and after WWII. Again, it proved to be a very reliable and effective combat arm. Dozens of other countries produced the rifles during and after WWII. One of the countries was Finland. It was during the Winter War (’39-’40) between Finland and invading Russian forces that Simo Häyhä used a Finnish Mosin to become the most successful sniper of any major war. Häyhä is credited with an 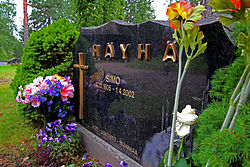 amazing 505 kills. The Russians appropriately referred to Häyhä as the “White Death.”

The Mosin-Nagant uses a push feed two lug bolt. The bolt head, like the Enfield and unlike the Mauser, is removable and replaceable. The bolt head is recessed with a spring loaded extractor and a receiver mounted ejector. Interestingly, the bolt locks in a horizontal position. The rifle is chambered in a 7.62 MM (.30 caliber) round similar to the 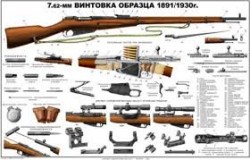 While the exact number of Mosin-Nagant rifles produced is impossible to estimate, I’ve heard the number of 35 million quite often, there are lots of surplus rifles available to American shooters. A quick

check of internet offerings showed prices as low as $ 150.00. Many major sporting goods and firearms retailers have them in stock. If you can find a Remington produced Mosin-Nagant, BUY IT! You will have a very nice rifle and own a piece of history.