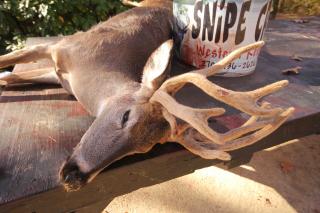 It is the final days of the General rifle season here in Montana. For some, it is time to get out and fill your tag. Be aware that even though it may look like a legal buck, there is a very rare chance that your buck may still be a doe.

When Chris Dusio and his dad made the 28-hour drive from Massachusetts to western Kentucky to hunt opening weekend of gun season, they had no way of knowing what they might see.

When the deer stopped in an opening to browse, Chris got the racked animal in his scope and took the shot. Initially, things didn’t look good. “It just disappeared. The other doe took off running across the field, and then I heard another deer blowing from the area where they’d been standing. I thought, ‘Surely I didn’t miss.’ I called my guide, and when we walked up there, I’d dropped the deer in its tracks.”

That’s when things got interesting. The animal’s 14-point rack was still in full velvet. And upon further inspection, Chris realized his “buck” was missing some buck parts.

“My guide said, ‘That’s an antlered doe.’ When we got it back to camp and I saw everyone’s reaction to it, and then started researching it a bit, I realized just how rare it is.”