Bolt action rifles get there name for the similar action one finds when using the common turnbolt lock. Lift, pull back, push forward, and lock down; a simple but effectively strong action. The bolt action rifle, unlike its American cousins, the pump and lever actions, has its origins in Europe. Johan Nikolaus von Dreyse produced the first practical breech loading bolt action rifle around 1824. Von Dreyse perfected his needle rifle and it was adopted by the Prussian Army in 1841. Late 1850s, the

United States purchased a few Greene rifles, but it was decided that the gun was “too complicated” and most troops used muzzleloaders during the American Civil War. Throughout the latter half of the 19th century, European armies developed and adopted bolt action rifles as the standard military rifle.

Somewhat surprisingly, it was the French, with the Lebel, who first led the way in bolt rifle development; the Germans with their Mausers, and the English with Enfields, soon followed and by the time WWI began, all had very good combat bolt action rifles.

The U.S. Military’s first serious use of bolt rifles came with the M1885 Remington-Lee, followed by the British Lee-Metford. The Krag-Jørgensen won a trial in 1892 and in August of that year became America’s front line battle rifle. Anyone who has handled a Krag knows just how smooth this bolt action rifle is. The gun was chambered in “Cartridge, Caliber 30, U.S. Army,” more commonly known as .30-40 Krag. About 500,000 Krags were produced at the Sp 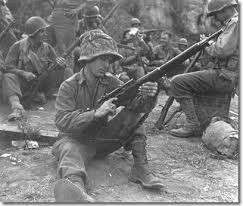 In 1903, one of the greatest bolt action rifles of all time was adopted by the U.S. Military. The ’03 Springfield was an improvement on the great Mauser design and eventually was chambered in the marvelous .30-06 Springfield cartridge. For a while before WWI, the U.S. paid royalties to Mauser for the use of its fine design. ’03 Springfields were used all through WWI, the years after, and even after the adoption of the M1 Garand, they were still in use by all the U.S. Military services. It is truly a great rifle.

Bolt action rifles are strong, accurate, and capable of being chambered in extremely powerful cartridges. They have been the mainstay of

both military and civilian shooters for nearly 150 years. There are three main types of bolt action rifles: Mauser, Lee-Enfield, and Mosin-Nagant. Over the next few posts we’ll study each and look at some of their derivatives.

Here’s a thought from my favorite founder and our 3rd President, Thomas Jefferson, “A strong body makes the mind strong. As to the species of exercises, I advise the gun. While this gives moderate exercise to the body, it gives boldness, enterprise and

independence to the mind. Games played with the ball, and others of that nature, are too violent for the body and stamp no character on the mind. Let your gun therefore be your constant companion of your walks.”