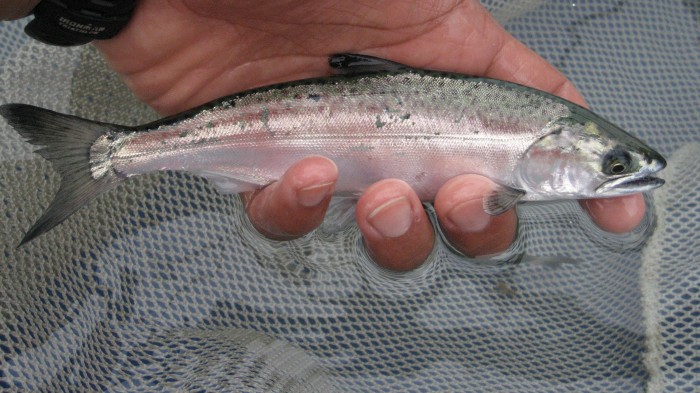 Fish-health testing by state fisheries biologists in November detected a virus in wild spawning kokanee salmon in the Kootenai River below Kootenai Falls.

While IHN doesn’t harm humans, it does occur naturally in Pacific Coast wild salmon, steelhead, and herring and can be passed on to other fish. The virus was known to be present in in portions of Kootenai River that pass through Idaho and Canada. It is not known how long the virus has been at this location in Montana, but since fish can move into Montana from the downstream reaches in Idaho and Canada, it likely has been around for some time.

Montana has sampled fish for the IHN virus from a variety of waters for about 20 years. In 2013, shortly after the virus was detected in stretches of Kootenai River in British Columbia, Canada, FWP began testing for the ailment in the Kootenai River in Montana.

Impacts to wild populations are poorly understood, although fish kills in the wild appear to be rare. IHN, however, can be extremely lethal in hatchery settings and has often erupted in hatcheries from Alaska to California. The virus attacks the blood-forming tissues of the kidney.

Deleray said the Montana finding will lead FWP to redouble efforts to keep the virus from spreading into wild kokanee salmon brood stocks in Lake Mary Ronan—where salmon eggs are collected each fall—and to nearby fish hatcheries at Murray Springs near Eureka and the Flathead Lake Salmon Hatchery south of Somers.

In other states, the virus entered hatcheries via water pumped in from associated rivers and streams. Recent tests found no salmon or trout species being reared at the Murray Spring and Flathead Lake facilities have contracted the virus. Neither of the hatcheries use surface waters.

The virus was first noticed in sockeye fingerlings at a Washington State fish hatchery at Winthrop, Wash., in 1951. Columbia Basin trout farmers in Idaho have battled IHN since the early 1970s.
A vaccine has been developed to combat IHN, Deleray said, but it is expensive, not yet approved for use in the U.S., and not useful outside of hatcheries.

Deleray said the discovery of IHN in state waters will lead to increased monitoring and testing of trout and salmon in other waters in the region and additional protective measures at our state hatcheries.
Montana’s best defense against the destruction caused by invasive species and fish diseases is for anglers and others to get into the ‘inspect, clean, and dry habit’,” Deleray said.

“If we all inspect, clean, and dry our boats, trailers, and fishing gear after each use we have a chance to control the spread of invasive plants, animal and disease by not carrying them from one water to the next,” Deleray said.