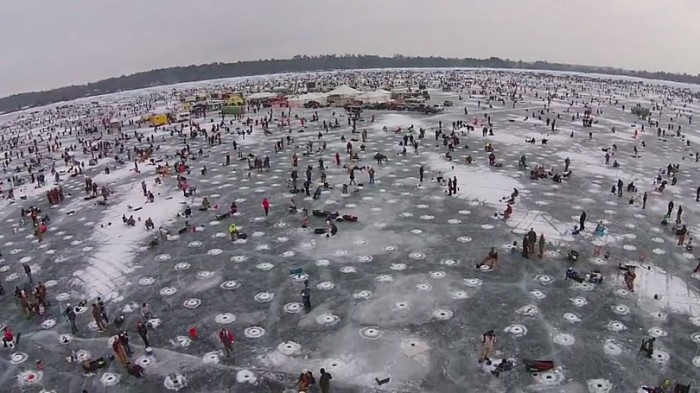 The Largest Charitable Ice Fishing Contest in the World
By angelamontana

The next time you are frustrated with sharing your super secret ice fishing spot, you can now feel better knowing at least you aren’t fishing THIS close to THIS many anglers.  Actually, this gathering of ice anglers is the largest charitable ice fishing contest in the world, which takes place in Minnesota.

This year, anglers at Gull Lake were enjoying “unseasonably warm temperatures”, according to outdoorhub.com. “More than 11,000 anglers showed up for the 25th Annual Brainerd Jaycees Ice Fishing Extravaganza, which is considered the largest annual charity ice fishing contest in the world.”

The proceeds from the contest are donated to several charities in the Brainerd Lakes area, with the largest beneficiary being the Confidence Learning Center, which is an “outdoor recreational and education center for people with developmental disabilities”.  Close to $3 million has been raised since the very first Brainerd Jaycees ice fishing contest was held in 1991.  Wow!