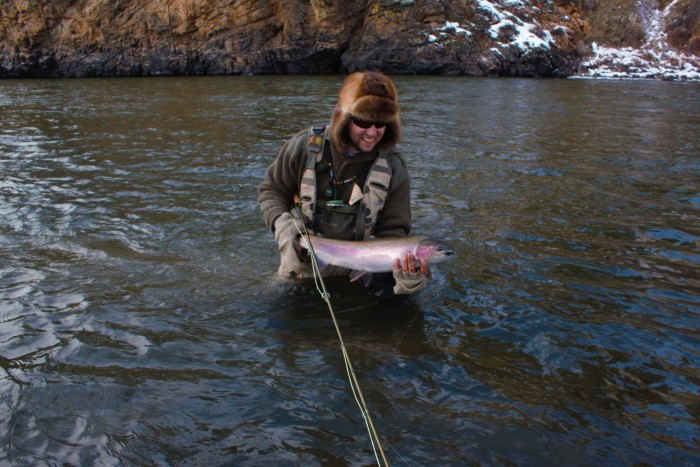 The Salmon River has been holding steelhead all winter, in fact a few reports of steelheaders etching out great catches in December caught my attention. If it weren’t for my other outdoor passions I would likely be on steely rivers with those diehards.

While I found myself alone fishing near Shoup, Idaho on February 3rd I did pass one RV along the road and later saw the driver of the accompanying pickup truck fishing in a nice looking hole on my way out. This individual accounted for the entirety of fishing pressure along the river banks.

The section of river called “Dead Water” was frozen all the way across except for a few open riffles with ice creeping in from the sides. Ice jams blocked passage on side channels and narrow sections, something to note for later this Spring. 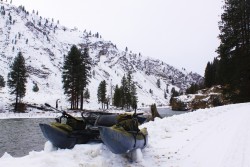 I eased into the icy water with my Colorado pontoon boat and all my gear. A quick effort to paddle across before getting pulled downstream by the current afforded me the option of fishing on the opposite side of the river. This effort is necessary when the place is packed with steelheaders’ but on this day it was a matter of preference, I had the whole river to myself.

Anyone who fishes for steelhead regularly knows that a big bag of tricks and persistence are the keys to success. I tried a variety of techniques and lures – things that have worked well in the past. I don’t like using bobbers or strike indicators and I really don’t like sink tip line although I had them ready in case that was the ticket on this trip. 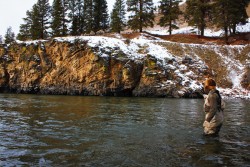 After five hours of catching nothing I tied the only black squid “fly” onto my 8 weight rod and fiddled with a split shot until I had the depth just right so it was just ticking across the bottom as it floated along in the current. Suddenly I felt a bump and set the hook (like I do about every 30 seconds while fishing) but this hook set felt soft and as I pulled harder a steelhead emerged and rolled with the big black fly securely in its mouth. 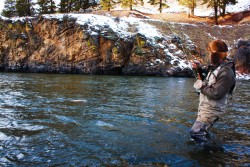 I fought the fish down the river until I was in front of my camera which I already had mounted on a tripod, Not something the average angler needs to be concerned with but a necessary trick for Outdoor Writers who fish solo and need photographic support.

I tailed the steelhead and admired it for a moment as I reached for the button on my camera and posed for the shot. The first steelhead of 2015 for me had a fully intact adipose fin signifying that it is a wild steelhead and must be released. The camera flashed and as I reached to pull the hook the fish rolled and broke the line taking the only black squid fly I had with it. 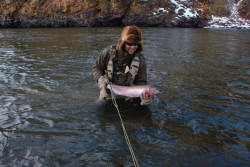