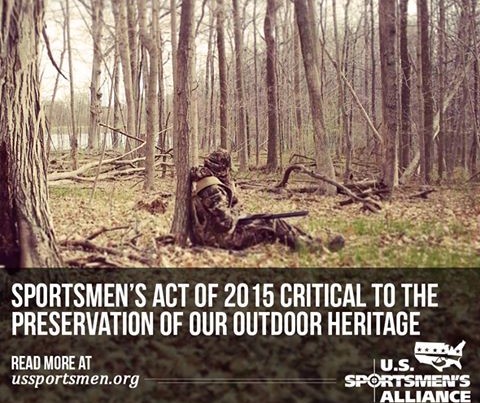 After two failed attempts in the past three years, a group of bipartisan U.S. Senators have introduced the Sportsmen’s Act of 2015, which aims to “protect and enhance the opportunities for recreational hunting, fishing, and shooting, and for other purposes.”

• Opening lands held by the Bureau of Land Management and U.S. Forest Service to hunting, fishing and shooting, unless specifically closed.

• Facilitate the construction and expansion of public target and shooting ranges on federal lands and non-federal lands.

• Make the current exemption of lead shot from EPA regulation permanent, while adding lead tackle to the list of exempt products.

• Allocates 1.5 percent of the annual Land and Water Conservation Fund to enhance access for sportsmen wishing to hunt, fish and shoot on public lands.

Passing of the Sportsmen’s Act of 2015, which has been widely accepted by both Republicans and Democrats, would secure opportunities for future generations to enjoy access to quality hunting, fishing and trapping.

But not everyone is happy.

The Humane Society of the United States has voiced strong opposition to the Bipartisan Sportsmen’s Act of 2015, primarily because opening public lands to sportsmen would increase opportunities for hunters and trappers – two groups the anti-hunting organization has fought feverishly to strip the rights of during the past 60 years.