Three Amigos (by Trevor Johnson of Kit’s Tackle)
By angelamontana

After my beautiful wife and I celebrated our anniversary on Valentine’s Day and of course spoiled our sweet daughter Maclean with tons of loves, it was bro fishing time.   My best man Chris Schlenker traveled over from Coeur d’Alene, Idaho to spend the weekend with dad and I. Chris and I have been best inseparable pals since the first grade summer terrorizing the bass at our local Spring Meadow state park.   Our friendship and adventures have grown ever since. 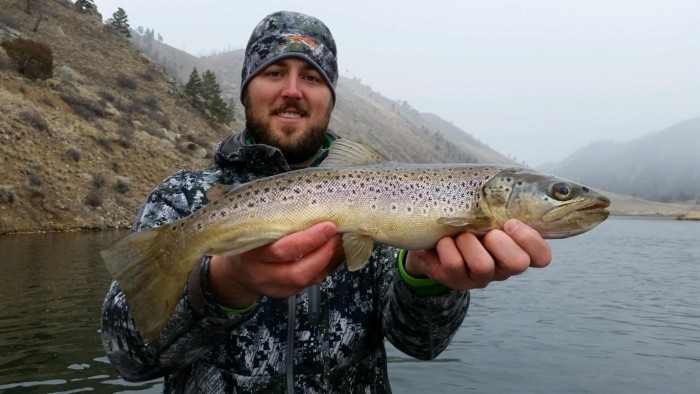 The next morning came early and I was awake and excited with anticipation to get to the water.   Dad and Chris showed up at my house to pick me up and we were GOM (Gates of Mountains) bound! We started the morning off with breakfast sandwiches, coffee and a couple laughs. And to quickly follow ol’ Schlenk’s boated a gorgeous post spawn female brownie to start the day off. The best part was you could see the browns aura seeping into Chris’s soul. This is what separates a true sportsman from the rest.

Stuffed on sausage egg biscuits and a 21’’ slab of slimy soul food thanks to Chris; we decided to make a quick pass at the walleye before heading into the canyon for some hot rainbow trout action. With Chris on a little heater he yipped, “Fish guys, nice fish.” Looking at the way his rod was moving I knew right away it wasn’t a trout. By the time I was ready with the net a big snakelike creature appeared from the depths. As few ling as a guy catches in open water from a boat, you never expect it or get used to it. I scooped the eel into the net and we high-fived of the fry pan feast Chris had just landed. It wasn’t fifteen minutes later and I set the hook in a SOLID fish. After my snag started moving and the headshakes starting coming I looked to dad and Chris and muttered, “This is going to be a HUGE walleye guys.” Taking longer to come up than any walleye I have ever caught my blood really started to pump.   Already envisioning a walleye as big around as a basketball, it finally came up…GIANT LING!! Like really big ling! Disappointed it wasn’t a sixteen pound walleye; I quickly assured myself how awesome a catch it still was.

After the drift was finished we decided to move into the canyon and start tossing jigs to shore for the wild striking rainbow trout. With the wind starting to howl and snow pellets welting our face, we toughed it out for the action ahead. Just two days prior, dad and our good friend Mike Lowery boated over 100 trout. Well, what we missed was good ol’ Mother Nature slapped a twenty degree temperature change in our face and made the fishing tough! We kept the jigs flying to shore and worked our butts off to catch a limit of mint silver rainbows for the smoker. We don’t often keep fish, but we always do an early spring batch of smoked fish. We target the immature 16-18” non-spawning fish that are the perfect size for the smoker. 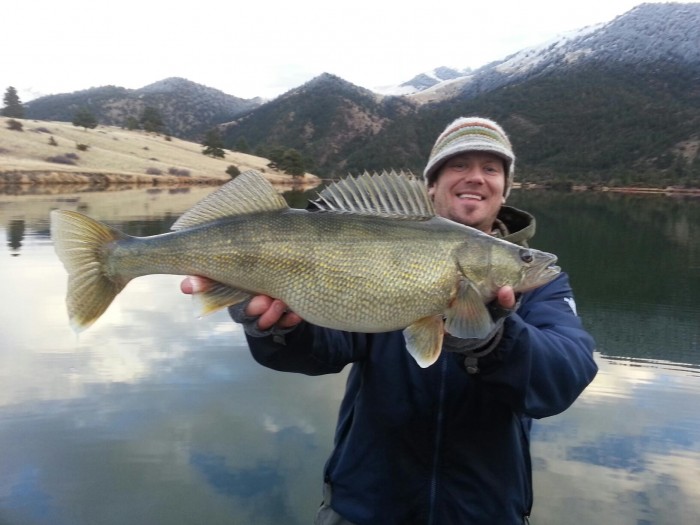 About the time we were half frozen to death and to stubborn to call it a day the craziest thing happened. The white caps, snow pellets and cold all disappeared in an instant. It went from borderline survival mode to ABSOLUTELY GORGEOUS! My dad looked over at us and said, “It feels like walleye boys.” Let’s just say I wasn’t about to argue with that! With about an hour and a half left to fish we headed down to one of our walleye holes that can produce big pre-spawn females.

This is where it gets difficult to put pen to paper. No matter how I describe the beauty and feeling of peace we felt that night it wouldn’t be possible to understand…only us three amigos looking up at the sleeping giant will understand. And about the time I could feel the night’s magic breathing down my neck…she bit. My drag started squealing and I could see my line coming to the surface. Knowing the fish was going to jump I prepared myself for the big rainbow I must have hooked. When the fish attempted to make a flying leap out of the water it was no silver sided rainbow…it was a huge walleye! At that moment, I literally pooped a green nickel right down my pant leg and onto the front deck of the Lund.   Doing battle with the egg laden beast, she finally succumbed to the net. We were all laughing in disbelieve and high fiving like we just won the game about the experience we had just shared. The sky was purple, the pine trees were frosted white and we were holding a magnificent fish.

It was amazing to share this experience with Chris and dad. You could literally see Chris tearing up from being so happy. For a couple seconds life stopped completely, we were in a surreal dream that couldn’t get more perfect.   Snapping out of it, I kissed the beautiful hen on her lips goodbye and we watched her white tail tick wave goodbye as she happily swam off. What a magical moment!

I had an awesome weekend with my dad and my best man Chris. And looking back at that night…sometimes there is a thin yolk between dreams and reality. Hence, “Jiggin’ the Dream”.