A Spring Day Fishing on Flathead: Captain’s Column (3.12.15)
By angelamontana 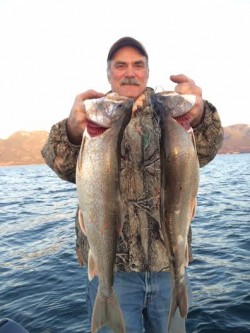 In an effort to take advantage of the nice weather last Monday and an itch to spend the day on a body of water I decided to call Dick Zimmer, otherwise known as the Macman from Zimmer Tackle. I hadn’t spent a spring day fishing for lake trout on Flathead Lake for the past few years and thought it might be a logical destination. Zimmer has made a living making fishing tackle that is very effective for catching lake trout and on top of that he is always a fun fishing partner. “I have a lot of orders that I need to get out,” he told me on the phone but then he added, “I sure would like to go though so let me check and I will call you back”.

The call back was a yes from Zimmer and we agreed that I would pick him up at 1pm so we could get on the water by 2pm. “The fishing has been better in the afternoon as the day warms up,” said Zimmer. We launched the boat at the Blue Bay boat ramp which now has a mini-dock in place which is of great help when launching during the spring low water elevation on Flathead. A welcomed guest on the boat was Jim Swanson who recently moved to Polson last year. Swanson was excited to fish with Zimmer and pick his brain on how to better fish Flathead Lake. 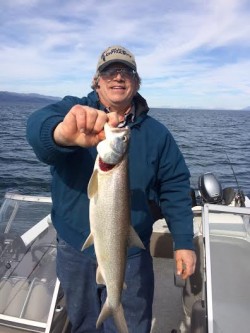 Once we were in the boat and on the lake, we headed under the direction of Zimmer to a spot east of Yellow Bay searching for a depth of 300 to 315 feet. Once we were there, I pushed the anchor mode on my I-Pilot and we started fishing. I quickly found out that when fishing at that depth monofilament fishing line is inferior to braided line. You can’t feel the fish as well with mono and it has way to much stretch in it to be effective. On top of that the fishing reel, I intended to use didn’t have enough mono line on the spool anyway to get down 300 feet. “No problem”, said Zimmer who has probably encountered this problem with other fishing partners, “I have a set-up you can use”.

Zimmer, as you might expect, was the first to catch a fish using one of his green glow grub jig 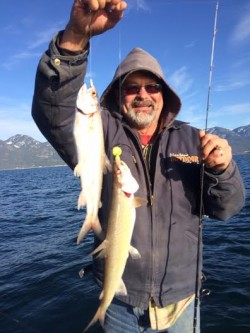 s tipped with cut bait and a fly positioned 6 inches above the jig that was tipped with a night crawler. The 18 inch lake trout bit on the fly with the crawler. But, fishing was slow at that depth, so Zimmer instructed me to motor on over to Rocky Point. It was there in 200 feet of water I finally found out how all those Spring Mack Days anglers come in with catches of 50 plus fish each day.

For at least 30 minutes it was non-stop action. We had anchored on a nice school of small lake trout and they were on the bite. I was using the same set-up as Zimmer, and Swanson was using a Zimmer Lead-A-Gator jig. Most of the fish were biting on the jig not the fly.

The next spot on the lake was north of the Narrows in 180 feet of water. Same thing, action for about 30 minutes and then the bite shut down. “In the spring fish deep, don’t stay in one spot to long if you aren’t getting any action, move and try to get on top of an active school of fish”. added Zimmer, “and make sure you have enough line on your reel to get to the bottom”.