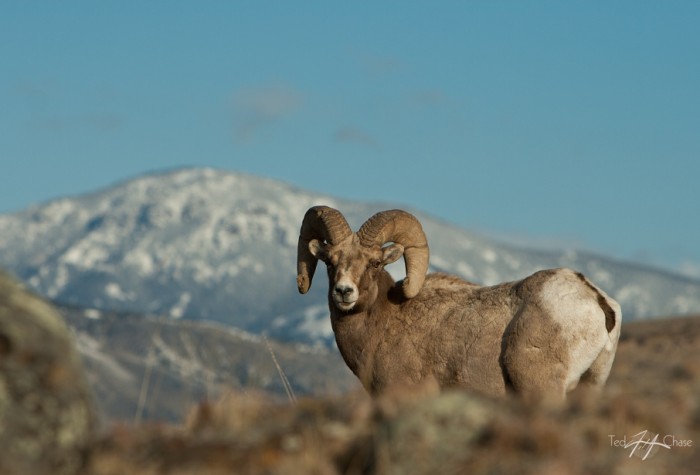 Sportsmen and people riding dirt bikes, four wheelers, snowmobiles and horses aren’t the only ones who need to be careful while they’re out and about in the beauty that is Montana.  Even wildlife photographers are at risk for some injuries while in the field.  Check out this story by internationally-recognized wildlife photographer Ted Chase via Off Trail Photography blog:

After yet another rough and cold Montana winter the weather finally cooperated and so it was time to explore. It was a pretty warm Spring day in Yellowstone National Park and the snow was starting to melt. The nice weather prompted me to go explore the mountains and my goal was to get some shots of some bighorn sheep.  I soon spotted a large group int he distance with my binnoculars. There were several rams feeding with some ewes and so started hiking in their general direction but hiding behind bluffs and creeping through small valleys to hide my presence. I had finally gotten within 80 yards unnoticed and was getting into position.

I tried to hide behind some small boulders to stay unnoticed, but when I knelt down to hide I sat on a prickly pear cactus. It caused me to make a sort of weird yelp and when I looked up 17 rams were heading straight towards me! They were moving towards me but suddenly they stopped. I soon realized a coyote was making its way up the ridge, it was a perfect distraction for me to change positions. I started moving quickly through the boulders hoping to find the perfect view to capture this moment. Suddenly, the coyote appeared directly above me and startled the sheep. They got spooked and started scaling the cliffs above me to get away from the intruder and went very high up on the cliffs. It seemed as though they were so high they were walking on air. It didn’t take them long to disappear over the top, I couldn’t help but to feel defeated. After walking about 4 miles on steep cliffs, kneeling in a cactus and stalking bighorn sheep for hours, all I could do was to sit there and enjoy the panoramic view.

Although, I hadn’t given up and decided to do what any rational person would do, I started to scale the cliffs hoping to get an epic shot of a huge ram. When I arrived on the top of the mountain I saw a few ewes studying every step I made and then down the ridge a small group of rams appeared. Luckily, they hadn’t seen me yet and I began taking my camera out when suddenly a pretty good sized ram appeared. He was staring directly at me! I quickly took a couple of pictures, but the clicking of my shutter startled the ram and he gave warning to the rest that an intruder was near. The rams ran over the small bluff and I quickly organized my camera gear and tried to follow them. I knew I would be able to sneak a little closer, but first had to get across a steep muddy cliff. The first step went well, the second step was a bit shaky and well there wasn’t much of a third step.  My foot had no traction and sent me sliding down a muddy grass-covered slope. Gaining more speed, I clawed at the mountain like a terrified cat climbing a screen door. I felt the panic setting in,  I soon realized that the end of the slope was near and in a last ditch effort I tried to protect my camera and sprung from the mountain, airborne anxiously waiting to feel the pain sheer through my body as I landed. Thwack! Feeling the pain in my hip I moaned and then again felt a thump as my head hit the rocks. Unfortunately, that’s about all I remember about the accident.

Apparently I laid there for quite some time and soon realized that I had been knocked unconscious. I slowly got up and quickly realized that I also injured my hip and knee and could hardly walk. Eventually, it started to dawn on me that it was getting dark and the air was cold. I realized I had to make my way out of the canyon. Fortunately, I was only about 4 miles from the car and was able to hobble my way out. Once again, I had cheated serious injury. The x-rays of my hip and knee were negative and worse case scenario if I would have had a bleed in my brain it would have presented itself within a few days. Another great adventure and in true to fashion I got the shot! Unfortunately, I took a few days off from the woods and I needed a new camera after I hit the ground…

Stay tuned for more stories from my adventures, but more importantly thanks for reading this one!