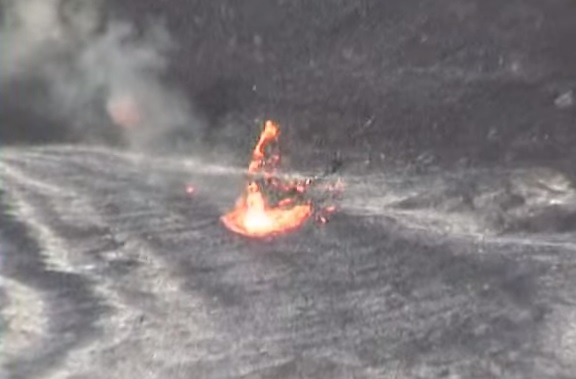 If you’re ever on vacation and decide to go camping near a lava lake, and you decide to dispose of the waste from your camping trip in the lake of lava….you might want to stay as far away from the area that you can, as the footage below shows you what happens when garbage penetrates the lava crust…volcanoes don’t like garbage!

Here’s some information on this test:Incineration of waste in Erta Ale Volcanoes lava lake. It is frequently discussed whether it is possible to sink in lava. Due to its high density, a person would generally be expected to remain on the surface. Indeed it is possible to briefly walk on certain types of lava if professional heat-protective clothing is worn (do not try yourself). However, the video shows that falling from a height, a person would be able to penetrate the crust of the lake and submerge in it. The test was performed with a box of camp waste (largely food rests) in a bin bag. Estimated weight 30kg, Size 60x60x60cm. Fall height, about 80m.